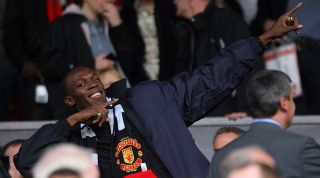 Bolt, the current world-record holder for the 100m and 200m sprints, has retired from athletics after a disappointing World Championships in London.

The Jamaican only managed a silver medal in the men’s 100m final after being beaten by the American Justin Gatlin, then pulled up in the 4x100m relay final with a hamstring injury and was unable to complete the race.

The match will actually be a second leg, with United having won 3-1 at the Camp Nou on June 30 via goals from Jesper Blomqvist, Karel Poborsky and a stunner from Dwight Yorke. The Barcelona side included great names as Patrick Kluivert, Rivaldo and Ronaldinho.

Bolt has made no secret of his desire to try professional football once his sprinting career was over, with the Jamaican previously claiming: "I’m not gonna say I’m going to be the best footballer in the world but I’d be at a good level, I’d say. Maybe Wayne Rooney level."

Despite the self-confidence, Bolt’s agent Ricky Simms has more recently admitted that his client would be more likely to play at a "League One or League Two" level should he enter the game professionally.

But rest assured: they both insist this is a serious plan. And we can’t wait…