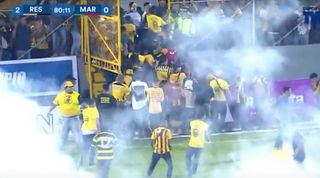 With the hosts already 2-0 up on Wednesday night, referee Armando Castro awarded Real Espana a penalty in the 81st minute after Bryan Barrios looked to have fouled Ivan Lopez in the box.

With frustrations already boiling over among the away support, the decision proved all too much for them inside the Morazan Stadium.

Once the Marathon fans broke the gate and stormed onto the pitch, the home support wanted a part of the action too. The end result was a mass brawl, with plenty of bottles thrown, which caused the league fixture to be suspended.

The police stepped in and dropped down some tear gas to clear the fans and, all in all, rounded off a troubling night in San Pedro Sula.