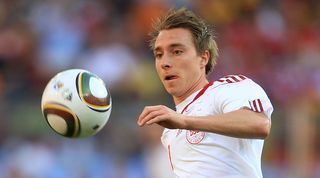 Pele did absolutely nothing in Brazil’s first two games at Sweden '58: he was still out with an injury. When he recovered, his team-mates demanded the kid start the next game – and so he did, aged 17 years and 235 days, creating Vava’s second goal as Brazil coasted into the knockouts.

He scored the quarter-final winner against Wales; a second-half semi-final hat-trick against France; and two goals in the final against the hosts, the first by outrageously flicking the ball over a defender before volleying into the corner of the net. At the final whistle he collapsed, and when he came round he promptly burst into tears.

Most golden boys lose their lustre along the way, but Rivera remained Il Golden Boy for decades. It helps that he represented Milan more than 650 times, won 60 caps, was part of the team that triumphed at Euro ‘68 and scored the winner in the 1970 semi-final. These things keep the shine on.

Even in 1962, the 18-year-old had a big name: he’d helped Italy to the Olympic semis in 1960 and Milan to the 1962 Serie A title. The following summer, he’d set up both goals in Milan’s European Cup final win. At Chile '62 he was restricted to one appearance – but bigger moments awaited.

A mate of Pele’s, the left-winger had impressed enough on his early showings for Santos to be taken to England. He didn’t get any time on-pitch as the double champions were dumped from the competition, but he did play at Mexico '70 and West Germany '74. Like his pal Pele, he spent most of his career at Santos but had a later spell further north – in his case, six years at Mexican outfit Tigres.

One of eight Peñarol players in a squad which also contained eight Nacional men, Losada started two group games against Israel and Sweden… and never appeared for the Celeste again. Coach Juan Hohberg left straight after the World Cup, and successive replacements didn’t feel the need to call upon Losada again.

Diminutive but ferocious, Losada took the counterintuitive step of switching to Olympiakos in 1972. He became something of a club legend there, winning four league titles during his eight-year spell. Among non-Greeks, only Predrag Dordevic has made more appearances for the Piraeus club.

Although Argentina '78 hero Mario Kempes took teenage tiptoes into World Cup action in West Germany, the even younger Petrovic was almost an old hand. He’d made his Red Star Belgrade debut at 16, and had already been in the national side for a year before a World Cup in which he played twice.

Affectionately known as the Pigeon, the slight ball-player won five league titles with Red Star before finally being allowed to leave on New Year’s Day 1983. He became Arsenal’s first big foreign signing and showed flashes of brilliance, but was soon kicked over the Channel to Belgium and later played in France too. A wandering managerial career started at Red Star and has included Greece, Belarus, China, Romania, Iraq and Yemen.

The teenage trio at Argentina '78 included Mexican legend-to-be Hugo Sanchez, but the youngest was a Wisla Krakow forward who only reached 5ft 9in even when he finished growing. Iwan’s six goals in his club’s 1977/78 title triumph was enough for instant elevation to the national squad, for whom he made his debut in the first-round win against Tunisia.

The Poles finished third in 1974 and 1982, but despite Zbigniew Boniek’s belief that "the Poland team of 1978 was the greatest Polish team of all time", they were squeezed out in the second group by Brazil and hosts Argentina.

Iwan went on to win more domestic titles, also playing in Germany and Greece; he scored 11 in 29 caps and later became a TV pundit.

Among the four other teenagers at Spain '82 was Giuseppe Bergomi, who went on to play 81 games for Italy and 756 for Inter. Sadly, the same longevity didn’t apply to Norman Whiteside’s career. The Belfast boy who could play in midfield or up top broke Pele’s youngest-participant record: he was just 17 years and 41 days when he made the first of five starts in Spain.

He’d made his Manchester United debut at 16, and had only played twice when Billy Bingham named him in the World Cup squad. He scored in cup finals for the Red Devils and attracted a £1.5m bid from Milan, but chose to stay put. Pity, in retrospect: perhaps the Milanello scientists might have helped with the Achilles and knee injuries which forced him to retire at just 26 years old.

Unless it’s the first World Cup you engaged with, Italia '90 pretty much stank the place up. The lowest goals-per-game average (the backpass was outlawed two years later), some defensive practices bordering on martial arts – and just two teenagers among the 352 protagonists. (Although there hadn’t been any at Mexico '86.)

Henderson, who edged out Costa Rica’s Ronald Gonzalez as the younger of the two, had seen plenty of USMNT game-time in the run-up to Italia '90, but didn’t get a minute on-pitch in the USA's zero-for-three campaign.

He remained on the roster for eight years while a club career took him to Germany and Norway, as well as Colorado Rapids, Kansas City Wizards, Miami Fusion, Columbus Crew and New York Red Bulls. He retired at 35.

Gary Kelly, Sunday Oliseh, Rigobert Song and Marc-Vivien Foe were among the teenagers packing suitcases for USA '94, but the biggest buzz of all was for the young Brazil phenomenon then known, confusingly, as ‘Ronaldinho’, to distinguish him from squad-mate Ronaldo Rodrigues de Jesus.

Whatever his name, O Fenomeno was always being taken for the experience rather than game-time: Carlos Alberto Parreira intended to make do with Romario, Bebeto, Muller and Viola.

It seems somewhat unnecessary to say what happened next with Ronaldo, but he certainly reached the pinnacle of the game: guest-editing FourFourTwo on the occasion of our 20th birthday – in 2014, because we both came to the big stage in 1994. Oh, and he scored some goals and won some stuff, too.

To many, France '98 means Michael Owen, but Ickle Mickey was one of 16 teenagers at the tournament – including Rio Ferdinand, Ricardo Gardner, Celestine Babayaro and Shinji Ono. Cameroon alone had six, of which the youngest was a future four-time African Player of the Year.

Eto’o, who had made his Cameroon debut at the age of 15 (and 364 days), appeared in defeat to Italy as the Indomitable Lions crashed out in the group. But he would help them win the 2000 Olympics and Africa Cup of Nations in both 2000 and 2002, also appearing at three more World Cups and becoming Cameroon’s all-time top scorer – quite aside from a stellar club career including Barcelona, Inter, Chelsea and three Champions League triumphs.

A fresh-faced Nigeria squad including no fewer than four teenagers went to Korea/Japan, although this rejuvenation was accelerated by the dropping of some senior players (including Finidi George and Sunday Oliseh) after a squabble over player payments. The youngest of them all, Opabunmi, had bagged the Silver Shoe as Nigeria reached the final of the 2001 U17 World Cup.

In the Far East’s group of death, the senior side lost narrowly to Argentina and Sweden. Manager Festus Onigbinde gave the youngster a World Cup bow against England, making him the third-youngest ever to play at a World Cup. But he never played for Nigeria again: Opabunmi retired at just 21 after glaucoma left him blind in one eye.

The 2006 World Cup squads included an unusually large cohort of 13 teenagers, including Leo Messi, Cesc Fabregas, Ryan Babel and Aaron Lennon – but the wettest-eared of all was Theo Walcott. London-born but Berkshire-bred, he hadn’t made a single appearance for Arsenal when the normally-conservative Sven-Goran Eriksson sprung a surprise by taking the 17-year-old to this World Cup.

He didn’t play a competitive minute for England until September 2008 against Andorra; four days later, he scored a sensational hat-trick in Croatia, but didn’t bag again until his 26th cap almost four years on. He hasn’t played for England since November 2016, and his international career – eight goals over 47 caps – must sadly be regarded as a disappointment.

The six-footer from Middelfart had already gained one-to-watch bookmarks before South Africa 2010; coming through the Ajax ranks, scoring in the Dutch Cup and becoming the fourth-youngest Denmark international. At the World Cup, Eriksen came on against Holland and Japan but the Danes crashed out.

Eriksen continued to improve for Ajax, moving Johan Cruyff to gush that “he’s a player I really like with all my heart” and paving the way for a Premier League move. Tottenham paid £11m in August 2013, and he has continued to progress: club player of the year in 2013/14, increasingly impressive thereafter, and named in the PFA team for the most recent season. The question may not be whether Eriksen will fulfil his potential so much as whether he will do it with Tottenham.

Quiz! Can you name the 20 most recent England captains?

Born on May 12 1996, when his 2014 squad captain Samuel Eto’o was already 15, Olinga was used to catching the eye early: he had become La Liga’s youngest-ever scorer at 16, for Manuel Pellegrini’s Malaga.

Perhaps encouraged by his agent Pini Zahavi, Olinga has certainly moved around the footballing world: he joined Mallorca aged 13 from Eto’o’s academy, left Malaga in January 2014 and signed for Apollon Limassol, who promptly lent him to Belgian side Zulte Waregem.

After the World Cup, which he watched from the bench, Olinga was shunted to Romanians Viitorul Constanta, while Eto’o complained that Sampdoria had reneged on a pledge to sign the kid. Instead, Olinga went back to Belgium with Royal Mouscron-Peruwelz, where last September he finally scored his second professional goal… at the age of 21. His only goal for Cameroon (so far) also came at that golden age of 16.