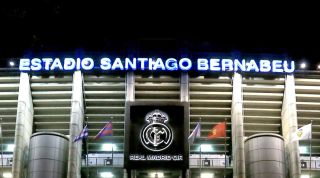 Success. Superstars. A legendary stadium. Separate stationery cupboards. Santiago Bernabeu Yeste means all this to Real Madrid Club de Futbol. His name will be forever connected to the aristocratic team, but not only because they play in a magnificent ground bearing his name.

Stationery? You may well ask. Senor Bernabeu probably didn’t buy office equipment and build furniture, but he did revolutionise the way football clubs are run. The ambitious Spaniard divided the organisation into separate departments with their own responsibilities and powers.

He gave Real an efficient, business-like structure. This overhaul, in the mid-1940s, was ahead of its time. It allowed the club to emerge from the shadow of more successful rivals Atletico Madrid, Barcelona and Athletic Club Bilbao.

This included scouting and recruitment specialists. Alfredo Di Stefano, the thrilling, all-action attacker who made Real into world beaters, was the greatest success story of Bernabeu’s attention to detail and mission to be the best.

Although admittedly no Di Stefano, Bernabeu had been a handy footballer himself some 40 years earlier. Born in Albacete in 1895, he moved with his family to the capital aged five. Just under a decade later he enrolled in the youth sector at Madrid Foot-Ball Club, as they were then known.

The young striker thrived and broke into the senior side, remaining there until his retirement in 1927. Despite graduating in law, the visionary decided against the legal life and took various coaching and administrative roles at the club. He got to know the football business and when the rapidly developing Spanish league became professional, Bernabeu seized the opportunity to make his team the planet’s first superpower.

Upon becoming president in 1943, the quixotic but determined figurehead put his legal training, contacts and intelligence to optimum use, transforming the Blancos. As well as the restructuring, he introduced new sports, including handball and basketball.

But the crowning glory was the construction of the New Charmartin Stadium. The old ground of the same name was tatty and old-fashioned. Opened in 1947 and updated throughout the 1950s, the new home was renamed after the president in 1955.

Then came the trophies.

Real won the first five editions of what became known as the European Cup (and, much later, the Champions League), a pancontinental competition Bernabeu helped set up. The dashing whites became the world’s first super team of international stars, including Argentine Di Stefano, Hungarian hitman Ferenc Puskas and Raymond Kopa, a France international of Polish origins.

The retirement of Di Stefano and Puskas, the arrival of the mighty Benfica, plus those crafty Italians with their catenaccio, slowed down the dominance, but Real won another European Cup in 1966. There were no more European Cups in Bernabeu’s lifetime, but his work and ideas had given the team global fame – and success. During his 35-year presidency, Real Madrid won 71 trophies.

When he passed away aged 82 in summer 1978, during the World Cup, FIFA ordered an official period of mourning. Argentina were finalists, just as they were last year when Di Stefano, the player most linked to the popular president, also died mid-tournament.

The stadium continued to host the biggest games. In 1980 Nottingham Forest won their second consecutive European Cup there. It received a handsome revamp for the World Cup two years later and Italy beat West Germany in the final. In recent times Jose Mourinho’s Inter won the treble-clinching Champions League in the famous arena.

The club is incredibly proud of the place. In 2009 they commissioned a special logo featuring the initials ESB for Estadio Santiago Bernabeu and 1947 (the opening date). The ornate motif featured on the team’s shirts for the 2009/10 season.

A futuristic overhaul is next. In January 2014 president Florentino Perez presented images of the new look. The renovation will supposedly include an ultra-modern shell, featuring LED lights, not dissimilar to Munich’s Allianz Arena. And it features a removable roof.

“We want it to be the best stadium in the world,” said Perez, “with maximum comfort, an icon of architecture and cutting edge. A world symbol, unique and spectacular.” Splendid words and lofty ambitions.

Legal wrangles have put the project in doubt. But Perez is more than a little similar to Don Santiago, with a steely resolve and friends in high places. Senor Bernabeu would approve of the mission to modernise. As he’d say, there is nothing wrong with aiming high. It’s the only way.

The ground One of the most famous sights in world football, the daunting “Scala del Calcio” in the San Siro area is a combination of a car park and spaceship. Home of struggling giants Inter and Milan, the 80,000 seater will stage the 2015 Champions League final.

The man The King of Calcio. Giuseppe Meazza (1910-1979) was a multitalented goal machine. He scored acrobatic goals, was a demon dribbler and his shots were thunderous. No ordinary Joe, he plundered 33 goals in 53 Italy games. Superhero Meazza was nicknamed the Da Vinci of football.

The ground Opened in 1935 under name Stadio Edda Ciana Mussolini, the 19,000-capacity ground was re-titled the Armando Picchi in 1990. AS Livorno still play there. Kraftwerk and Bob Dylan have performed at the Tuscan venue.

The man Inter Milan lynchpin Picchi was one of Italian football’s first and best sweepers. He started his career in midfield with hometown club Livorno. Later Nerazzurri boss Helenio Herrera converted Picchi into a libero and appointed him captain. ‘Armandino’ won two European Cups with Inter. After retiring he coached Livorno and Juventus, before dying of cancer aged only 35 in 1971.

The ground In the north-east of Italy, the Nereo Rocco Stadium opened in 1992. Various clubs have called it home, including Cagliari, Udinese and Triestina, who have been there since the start. The Italy team have played four internationals there. In June 2012 Bruce Springsteen popped in for a strum.

The man Wine-lover Nereo Rocco was a burly No.10 in his playing days but made his name as a coach. In the dugout for 787 Serie A matches, the gruff but caring master psychologist won two European Cups, two league titles, two Cup Winners’ Cups and an Intercontinental Cup as AC Milan chief. He was born in Trieste, played for his local team and died in the city aged 66 in 1979.