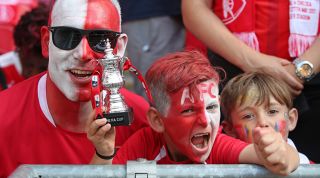 It has become one of those self-fulfilling whines; so much time spent discussing the slow death of the competition that it only ends up making many of the thousand cuts needed to kill it.

But despite the mournful laments and annual epitaphs, the FA Cup is still deeply loved and deeply admired. Look through the list of its supporters, those who believe it to be something deeply special, and see...

Let’s start with a concession: plenty of Premier League managers care little for the FA Cup – they have made that clear. Those who are competing for higher-profile trophies see it as a distraction and potential cause of fatigue, so they rest players in early rounds.

Those battling relegation do so for the same reason. The most galling are managers like Claude Puel, in charge of a team ninth in the Premier League and safe from relegation, who pick a weakened team and lose to lower-ranked clubs. That’s nothing but nonsense.

That does all threaten to harm the FA Cup, but it’s worth pointing out that the latter rounds do usually provoke stronger team selections. And if the managers of the strongest clubs don’t care, their clubs are still pretty good at winning it.

For supporters, a different story. It’s probably true that a large number of younger armchair fans, particularly those who live abroad without any experience of traditional English football culture, put little stock in the poor relation of the Premier League and Champions League. But then there are also those abroad who grew up watching iconic Wembley finals and feel very differently. If you support Manchester United and the first FA Cup final you remember was Eric Cantona scoring the winner against Liverpool, how could it not form part of your football-supporting DNA?

For season-ticket holders, it certainly matters. Many will have rejoiced at Wembley or the Millennium Stadium for an FA Cup final victory. Others will have watched on from home, adorned with scarves and replica shirts having paced the house nervously until kick-off. More still will have used trophy counts as ammunition in pub arguments or on social media, the equivalent of Jose Mourinho holding up his fingers to indicate the number of honours won. They all still care.

All supporters of lower-league clubs

The proof is there. If a lower-league side draws a top-flight team in both the EFL Cup and the FA Cup, the latter will always draw a higher attendance regardless of kick-off time. The FA Cup retains an appeal for lower-league supporters and the local community that is passed down through the tales of former glories. Sutton United, Hereford United, Wrexham, York City; these are the forefathers.

Out come the tinfoil, homemade FA Cup trophies. Out come the newspaper features with the once-weres, never-quite-made-its and never-quite-will-bes who aim to humble goliath. Out comes the entire town, as if on parade to be inspected by football itself. Newport County’s average league attendance this season is 3,315. Their attendance for the home game against Leicester? 6,705. They all still care.

QUIZ! Can you name the players who featured in Arsenal 1-2 Manchester United, 1999? (FA Cup semi-final replay)

Everyone in non-league football

See, here’s the thing about the ‘FA Cup is dying’ argument. The main evidence used is that some of the Premier League’s bigger clubs play weakened teams in early rounds, and that’s irrefutable. But then that evidence only carries weight if you believe the biggest teams are most important to the success of the cup. Those making that argument are guilty of precisely the crime that they are accusing.

The beauty of the FA Cup lies not in Manchester City vs Chelsea at Wembley, but the universality and sheer scope of the competition. The 2018/19 FA Cup has seen 736 clubs compete. It began on August 10, 2018, with Thetford Town hosting Fakenham Town, Winslow United facing Easington Sports and Ascot United up against Camberley Town. This is where the magic of the competition lies: not in clubs aiming to get to Wembley, but those desperate to make it through as many qualifying rounds as possible and perhaps even the First Round proper. It is the achievement of Westfields in 2016/17, a Level 9 club that reached the First Round.

“The finances are a game changer for a club of our size,” Lincoln manager Danny Cowley said after his side’s exploits in 2016/17. “The main aim is to use last year as a legacy moving forward. We want sustained success. We want to invest the money wisely. We want to spend it on the infrastructure of the club. We’re just about to build our own training ground and we’re only a few years away from moving in to a new stadium, so we want to use that money for the future of the club.”

“Our season dipped after that defeat,” said then-Chasetown manager Danny Smith, whose team had led eventual finalists Cardiff in 2008. “It was hard to get motivated for a match at Dunstable Town when you've just played against Jimmy Floyd Hasselbaink, and we missed out on the play-offs by goal difference. But I don't regret the run, it's paid for a new stand at our ground and gave us great memories. The FA Cup may have become devalued but it still means a lot to players from our level."

The cup matters here because it aids survival. Lincoln may be flying high in League Two now, but it was the 2016/17 FA Cup run that allowed long-term goals to be achieved. For all the glitz of the FA Cup bandwagon rolling into town and out again on the same day, the competition’s greatest legacy is the gate receipt sharing that can sustain a football club for years.

“The [lost magic] argument, when looking at the top level, holds weight but misses the point for most clubs who don’t have huge resources,” wrote Liam Rosenior in his Guardian column in January 2018. “They are just as important to their fans and the pyramid system we all operate in, and a ‘proper cup run’ cannot only sustain them financially for years but also give an opportunity to their supporters to live the dream of competing with the big boys and tell stories to grandchildren about the day they were there. Tell me that’s not what football is all about?”

Sing it from the rooftops, Liam. They all still care.

Every supporter over the age of 30

We’re not the ones who need convincing. We recall those glorious days of yore; snapshots in time merged to create one combined memory. Of FA Cup final suits. Of pin badges. Of scarves hanging out of car windows. Of coaches on the M1.

Of players walking on the Wembley turf in their smart shoes. Of the marching band. Of a full day of television, recycling old clips that you knew off by heart anyway but were still delighted to see anyway, like catching up with an old friend. Of the mention of “hallowed turf” from TV commentators, whose voices have somehow become a touch more formal as if dressed for the big occasion. Of the long walk up Wembley steps. Of the FA Cup’s lid being worn by a ‘character’ on the lap of honour.

And importance is a multi-faceted term anyway – financial importance, sporting importance, emotional importance, cultural importance. The FA Cup still nails at least two out of four for us. We are not the ones who need convincing. We all still care.

Every supporter under the age of 16

So football on terrestrial television, bumper editions of Match of the Day and FA Cup final day? You better bloody believe it. They all still care.

QUIZ! Can you name the players who featured in Arsenal 1-2 Manchester United, 1999? (FA Cup semi-final replay)

If there are plenty of managers who see the FA Cup as a distraction, it would be a misapprehension to put players into the same camp. Speak to foreign players and they talk about the tradition and history of the FA Cup with a dose of reverence. Speak to domestic players and they will readily recall watching finals as a child, dreaming of making that same stage.

"I told my Chelsea team-mates that I really wanted them to enjoy the FA Cup because I know what the feeling is to win here," says Olivier Giroud. "Playing at Wembley is like playing in my garden; I love to play here and love to win here."

"I love this competition," says Aaron Ramsey. "We have been quite successful in recent years and you can see the passion that the players play with."

Don’t ever think that walking out at Wembley for the FA Cup final has somehow lost its meaning to international footballers. They all still care.