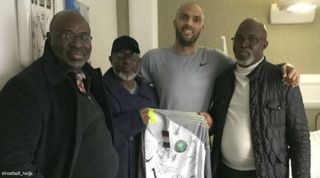 The 31-year-old Wolves goalkeeper was informed that he had the disease last summer ahead of the Championship club's promotion-winning campaign, and missed the entire season to receive vital treatment.

But ahead of Nigeria's friendly against England at Wembley on Saturday, head coach Gernot Rohr said: "Until the last moment, there is a possibility of bringing in these players. Carl Ikeme will be our 24th player to the World Cup."

Rohr admitted two weeks ago that the absence of 10-cap Ikeme – who was named Nigeria's man of the match in their opening qualifier against Zambia in October 2016 – was his "biggest regret" heading into the tournament.

Nigeria have a history of awarding honorary roles. Former West Brom striker Peter Odemwingie was named as their 24th man for the 2002 World Cup squad, while Tijani Babangida was brought along in 1998.

The Super Eagles face Croatia, Iceland and Argentina in Group D in Russia this summer.