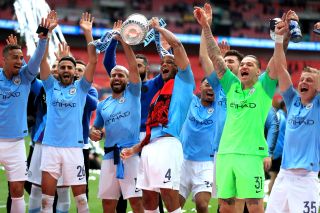 Here, the PA news agency looks at some of the main talking points ahead of the ties.

What are the ties?

Given the ties were originally due to take place over the weekend of March 21-22, people could be forgiven for forgetting how the balls came out in the sixth round draw. Favourites Manchester City continue their quest to retain the trophy as they travel to Newcastle while relegation-threatened Norwich host Manchester United. Out-of-form Sheffield United and Arsenal clash at Bramall Lane with Champions League challengers Leicester and Chelsea facing each other at the King Power Stadium. All games are behind closed doors in line with current protocols.

There could be a new first this weekend with teams now permitted to make up to six substitutes in the competition. As with the Premier League decision to ease the burden on players following the coronavirus lockdown, five substitutions from a bench of nine will be permitted in three stoppages, excluding half-time, during normal time. An extra change will be allowed in matches that go to extra time.

With the Premier League title gone and the Champions League not resuming until August, City manager Pep Guardiola has all but said the FA Cup is now his immediate priority. Having won the trophy last season, and the Carabao Cup for the past three years, there is no doubting their determination to win cup competitions.

Norwich, the Premier League’s bottom side, have struggled since the resumption of football this month and look doomed to relegation. The cup could offer some respite from their situation and potentially offer something to look forward to in the rest of the season. The formbook would suggest they are up against it, however. United are unbeaten in 13 matches in all competitions and there is much excitement over the newly-formed midfield partnership of Bruno Fernandes and Paul Pogba.

The Leicester-Chelsea and Sheffield United-Arsenal ties are intriguing given their positions in the Premier League table. Leicester and Chelsea will be taking time out from their battle for third place to fight for a semi-final spot. Chelsea undoubtedly have the momentum with two wins since restart, including Thursday’s success over Manchester City, while Leicester have endured two frustrating draws. Sheffield United have seen their European bid hit with a run of just one point from three games while Arsenal, deeply unimpressive in their first two post-lockdown outings, got back to winning ways against Southampton on Thursday.