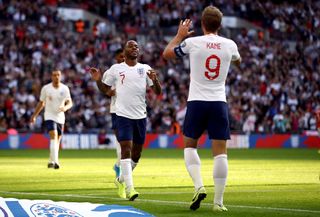 A hat-trick from Harry Kane and a goal from Raheem Sterling gave England a comfortable 4-0 victory over Bulgaria in their Euro 2020 qualifier.

Here, the PA news agency looks at five things we learned from the game.

Bulgaria came to frustrate, playing with five at the back, but manager Gareth Southgate went for a rather safe midfield of Jordan Henderson, Harry Winks and Ross Barkley, when the inclusion of James Maddison, on top form for Leicester, or Mason Mount would have offered a different dimension.

Kieran Trippier was given the nod ahead of Trent Alexander-Arnold despite the England coach this week admitting he had left out Manchester City’s vastly-experienced Kyle Walker to develop younger talents. The 28-year-old Atletico Madrid defender did not definitively press his claims and should have offered more against a packed Bulgarian defence.

Manchester City’s Sterling has been in top form for some time now and the criticism of him at the World Cup 14 months ago seems a long time ago. A versatile, positive, forward who has proved he can score on any stage, the 24-year-old is still improving and his importance to England’s future should not be underappreciated.

So clear, no VAR

Calm as you like from the spot. Nicely done, @HKane 👌pic.twitter.com/66OVdOajqU— England (@England) September 7, 2019

VAR’s introduction into the Premier League this season has resulted in a fair bit of criticism. However, it is not in operation for international matches so there were no long delays with the crowd waiting to discover what was being checked and made for a more fluid, enjoyable occasion. The second-half penalty decisions – albeit straightforward ones – were cases in point.

Jordan Henderson set a new record for an England midfielder or forward of 52 England appearances without a goal. Much of the criticism the Liverpool captain has had, especially at club level, is that he is not Steven Gerrard and that was evident from his 15th-minute volley from Danny Rose’s cross which put the assistant referee in more danger than goalkeeper Plamen Iliev.