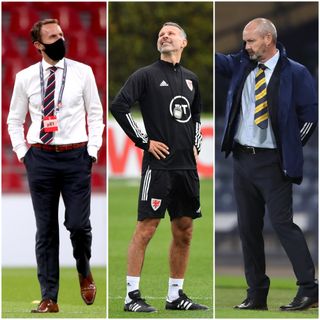 The opening rounds of the new Nations League campaign brought mixed fortunes for England, Scotland, Wales, the Republic of Ireland and Northern Ireland.

Here, the PA news agency takes a look at how the countries may fare based on their first two fixtures.

🇩🇰🆚🏴󠁧󠁢󠁥󠁮󠁧󠁿 Christian Eriksen and Harry Kane came close, but it was stalemate for Denmark and England in Copenhagen…#NationsLeague— UEFA Nations League (@EURO2020) September 8, 2020

Gareth Southgate’s side produced a low-key opening to their first international games since football was halted by the coronavirus pandemic.

It took a late Raheem Sterling penalty to beat Iceland 1-0 on Saturday, which was followed by a laboured goalless draw away to Denmark – a match overshadowed by Phil Foden and Mason Greenwood being sent home for breaching the squad’s bio-secure bubble while in Reykjavik.

England managed only two attempts on target in Copenhagen on Tuesday night, with captain Harry Kane rounding the goalkeeper late on only to see the ball hacked off the line.

However, maximum points from their opening two League A Group Two games would have papered over the tactical problems for which Southgate must find swift answers before Belgium visit Wembley next month – by when the England players should be a bit sharper after some more action with their clubs.

Whisper it softly, but Scotland have some momentum on their 11-month unbeaten run.

Steve Clarke’s men did not exactly fire on all cylinders, with a 1-1 draw against Israel at Hampden Park followed by a 2-1 win over a scratch Czech Republic side thrown together at just 48 hours’ notice after a coronavirus crisis.

Nevertheless, Scotland are a point clear of the Czechs at the top of the standings in League B Group Two – and have their focus firmly on taking that form into next month’s crunch Euro 2020 play-off semi-final against Israel.

Wales are also on a role under Ryan Giggs.

Sunday’s 1-0 win over Bulgaria in Cardiff was a fourth straight victory, having also seen off Finland in Helsinki.

Next up is a friendly against England at Wembley in October, before Wales will be looking to make it three wins out of three in League B Group Four when they travel to the Republic of Ireland.

New Republic manager Stephen Kenny saw his first competitive games end on a low with a 1-0 home defeat by Finland following the 1-1 draw in Bulgaria.

But for a late header from captain Shane Duffy in Sofia, it could easily have been successive defeats for the former under-21s boss.

However, after having only a couple of days to work with the full senior squad, Kenny is confident the players will reconvene a much sharper group when they gather again to prepare for their own Euro 2020 play-off semi-final against Slovakia in Bratislava on October 8.

⚽️ FT: A tough night for us ends in a 5-1 win for Norway #GAWApic.twitter.com/PkLzcp0URE— Northern Ireland (@NorthernIreland) September 7, 2020

Being turned over 5-1 at home by Norway’s marauding front line was hardly ideal preparation for Northern Ireland’s upcoming Euro 2020 qualifying play-off against Bosnia and Herzegovina.

Ian Baraclough had been appointed to replace Michael O’Neill during April, with his first match being a 1-1 draw against Romania in Bucharest.

However, only a late header from Cardiff midfielder Gavin Whyte secured a first ever Nations League point – which also was down to some heroics from young Burnley goalkeeper Bailey Peacock-Farrell.

The Green and White Army, though, can now look to produce their battling best again for the trip to Zenica – where victory would see them secure a home tie against Slovakia or the Republic of Ireland for a shot at next summer’s Euro 2020 finals.