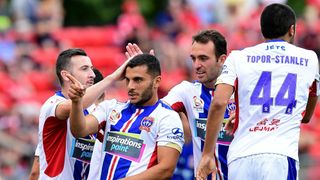 Newcastle Jets came from behind to beat Adelaide United 2-1 and go top of the A-League, while Melbourne Victory and Brisbane Roar remain winless.

The Jets moved a point clear of defending champions Sydney FC thanks to goals from Benjamin Kantarovski and Andrew Nabbout, but could be displaced by Melbourne City if they beat Western Sydney Wanderers on Sunday.

Nikola Mileusnic gave Adelaide the lead in the 24th minute, latching onto Ryan Kitto's excellent ball in behind for his first league goal since January.

Newcastle equalised on the stroke of half-time when Kantarovski volleyed home Dimitri Petratos' cross at the near post after a short-corner routine.

Nabbout pounced on some shoddy defending to round Paul Izzo and put the visitors ahead at Coopers Stadium just 64 seconds after the restart.

Roy O'Donovan somehow failed to add to the Jets' tally in front of an open goal but Ernie Merrick's side were able to secure a third straight away win for a new club record.

The moment Andrew Nabbout put us in front!‍‍‍‍‍‍ ‍‍The Jets continue their undefeated run in the 2017/18 Hyundai A-League – winning three consecutive away games for the first time in club history November 11, 2017

While Newcastle remain undefeated, Brisbane and the Victory are still in the hunt for a first win this term following a 1-1 draw at Etihad Stadium in Melbourne.

Besart Berisha looked to have won it for the hosts when he marked his return from a two-game suspension with an instinctive finish, but Brett Holman tucked home from close range six minutes from time to ensure the spoils were shared.