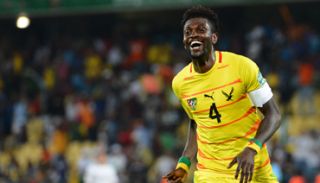 He was named in a 23-man squad released by the Togolese Football Federation on Saturday.

The Tottenham Hotspur striker stayed away from the loss in Cameroon following a public spat with coach Didier Six following the Africa Cup of Nations finals at the start of the year.

Adebayor was critical of the former French international's work even after Togo broke new ground by reaching the quarter-finals for the first time after seven failed attempts.

The tall forward was called up for the Group I match in Yaounde but did not turn up, much to the chagrin of the coach whose exasperation with Adebayor's indecision over committing to his country's cause caused Six to leave him out of the Nations Cup squad.

He was later over-ruled by the Togolese Football Federation president.

Without the talismanic influence of Adebayor, Togo lost to Cameroon but play them again in Lome on June 9 before facing Libya away five days later.

Togo lie bottom of the group with just one point halfway through qualification.