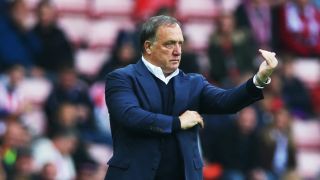 Newly appointed Netherlands coach Dick Advocaat has dismissed claims he approached the Royal Dutch Football Association (KNVB) to let them know he was keen on the job.

Advocaat was confirmed as new Netherlands boss on Tuesday, signing a contract until the end of the 2018 World Cup qualification campaign, potentially to be extended until after the tournament in Russia.

KNVB director Jean-Paul Decossaux suggested the 69-year-old had applied for the position through intermediaries, but Advocaat has stressed there is no truth in such claims.

"It is nonsense that I went down on my knees to get this job," Advocaat, who assumes the role for the third time in his career, told De Telegraaf.

"I did not have the desire to become national team coach and did not even see myself as a real candidate at first.

"If others mentioned my name or if [agent] Rob Jansen advised the KNVB, that did not happen because I asked them to do so.

"It would not have been a problem for me had they gone for someone else. But that did not happen. They picked me."