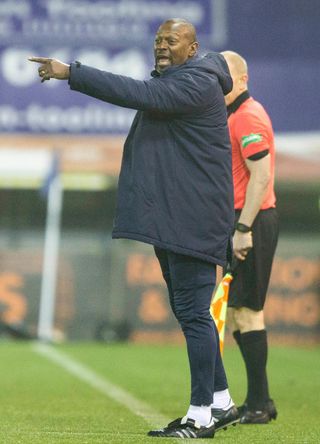 Killie chiefs have vowed to ban anyone found guilty of hurling discriminatory insults after TV cameras appeared to capture a shout aimed at Gers’ Colombian star during Wednesday’s clash.

And Dyer has backed the club’s zero-tolerance stance, saying: “I didn’t hear it on the night but if that is the case I know the club will look into it.

“If we can find the person who did this then they will obviously be banned from the football club because we won’t tolerate anything like this.

“My message is the football club doesn’t need anyone with those thoughts. Stay away.

“But we also know this isn’t just about football. It’s society’s problem but at the end of the day we don’t want anyone with that mentality around this football club.

“We can all do more. Everybody can do more. But we’ll do the best thing for Kilmarnock at this present time. Anyone who has those thoughts – and they are showing them – then get them out. Don’t let them anywhere near the place.”

Dyer is the only black manager in the Ladbrokes Premiership and has praised Killie for giving him the opportunity.

And he does not want his club’s reputation tarnished by one individual.

“Kilmarnock have been brilliant,” he said. “Obviously I’m sitting in this position because the club has given me a opportunity to manage it. As you can see I’m a black man but that never came into it at all. I was hired because of my ability and long may that continue.

“Yeah (Wednesday’s incident) is alarming. But what can you do? That’s one or two individuals. It’s not the majority. This is a great football club and a great town to live in with good people. One or two ain’t going to spoil it for the rest.

“We have to deal with it as best we can and if people do have those thoughts, we’ll eradicate it from this football club.”

A club spokesperson said: “The club is aware of an incident of alleged racism against Alfredo Morelos and will investigate this matter fully.

“Kilmarnock Football Club wholeheartedly condemns any form of racism and anyone found to be involved in incidents of this nature will be immediately banned from Rugby Park.

“If anyone has any information then we would encourage them to come forward.”

But the Rugby Park boss believes Sunday’s clash with Hibernian means more to his side than toppling Gers.

The Londoner – whose side can leapfrog Jack Ross’ team into the top six with a fourth straight league win – said: “Wednesday is finished now. We’re moving on.

“Now we look forward to the next one. Hibs are above us and we can catch them, so it’s important we get a win. Otherwise it doesn’t make the win against Rangers worth it.”