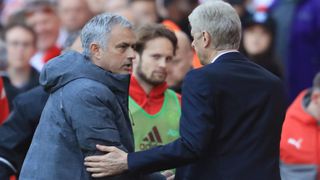 Jose Mourinho could not resist aiming a jibe at Arsenal after signing Alexis Sanchez, suggesting the forward left a "fantastic club" for a "giant club".

Months of speculation came to an end when former Barcelona star Sanchez joined United in a swap deal that saw Henrikh Mkhitaryan move to north London.

Securing Sanchez has been seen as a major coup for United after he had looked destined to join rivals Manchester City, but Mourinho's side were able to meet the demands of both Arsenal and the player, whereas the Premier League pacesetters were not.

Mourinho confirmed Sanchez is in the squad to face Yeovil Town in the FA Cup on Friday and the coach was particularly happy to conclude a deal that he feels is "fantastic" for all parties.

Jose Mourinho confirms that will be part of 's squad travelling to Yeovil for Friday night’s clash.January 25, 2018

"I think it was a fantastic deal and it's only that if it's fantastic for everybody," Mourinho told reporters in his pre-match news conference.

"Sanchez went from a fantastic club to a giant club. It was a great deal for everyone."

Mourinho did express some regret that Mkhitaryan failed to live up to expectations, though he has no doubt Arsenal have got themselves a capable player.

"I think Mkhitaryan will be better with Arsenal than with us," he said. "He has now one-and-a-half years in England now, he adapted and he knows the way Arsenal play, the way they think.

"It's a good move for everybody. That's why I'm also happy for Mkhitaryan.

"Could he have performed better? Could I have done better with him? Could he have given more to adapt to us? Maybe, but he did important things for us and I think there's a good feeling for everyone."

One area of uncertainty around Sanchez's move to United had been regarding where on the pitch Mourinho is likely to play him, but the Portuguese coach has cleared that up, stating he is confident in the 29-year-old's ability in any position across the front.

"He has been in England a long time," Mourinho added. "I think everybody knows what type of player he is and what he did at Arsenal.

"In the Premier League he showed already the quality he has, so we got one of the best attacking players in the world and it's very important for us because we want the best.

Jose on : “We’ve got one of the best attacking players in the world. I think he'll be very important for us because we want to have the best players possible.” January 25, 2018

"Our careers are almost made in the same countries, simultaneously. I know him very well.

"I saw him play very well on the left and on the right and behind striker. These are his positions. I saw him play different tactical positions, different philosophies, different managers. I have seen him be successful in every country, with every manager in every position.

"He's a player who becomes more than a player, and because of that motivation I think he can play in four different positions."