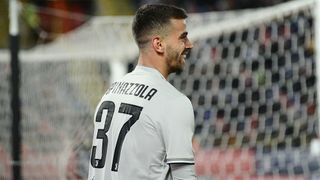 Left-back Spinazzola returned to Juve in pre-season following a spate of loan spells away from the Italian champions.

Spinazzola's most recent loan assignment with Atalanta over the previous two seasons saw the Italian impress, and it was decided he would be brought back to the club to offer competition for Alex Sandro.

But the 25-year-old had injury problems in the second half of last season and was out between May and October after surgery on a serious knee issue.

The win at Bologna was his first official game for Juve and Allegri was impressed.

"He had an excellent match," Allegri told reporters. "It was good for his first game back.

"He's an important player for us, so he's still at Juventus, also because of the injury to Juan Cuadrado, we have to have four full-backs.

"At the moment, we have evaluated it is the best solution for him to stay with us."

Eighteen-year-old striker Moise Kean got the clinching goal on Saturday, his first of the season since returning from his loan spell at Hellas Verona.

The young striker burst on to the scene at Juve the season before last, but is yet to really explode in a Bianconeri shirt – Allegri urged patience.

"Kean is a young boy who has to be allowed to grow up," Allegri said. "Unfortunately, in Italy everything is wanted right away, then they burn, we lose him years.

"He's a Juventus first-team player, he's a guy who can help us. [On Saturday] he scored, but he's a guy who always has goals when he plays, so it's his quality."