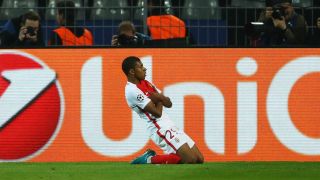 The Serie A champions visit the Stade Louis II on Wednesday for the first leg of their Champions League semi-final.

Led by Radamel Falcao and Mbappe, Monaco have struck a stunning 95 goals in 34 league games to top the Ligue 1 table.

Allegri said he was aware of the attacking talent at Leonardo Jardim's disposal ahead of the last-four tie.

"The numbers on Monaco's attack speak for themselves. I don't know how many goals they have scored, but I know it's a lot," he said.

"They go along well together. Falcao is an experienced player, Mbappe is incredible. He's very fast, and has great technical qualities.

"Bernardo Silva is also great, he's grown a lot since we last played them two years ago.

"It's a team that has done well not only because they are very well organised but also because they have great players."

Falcao and 18-year-old Mbappe have scored 52 goals between them in all competitions this season, with the teenager linked with a big-money move.