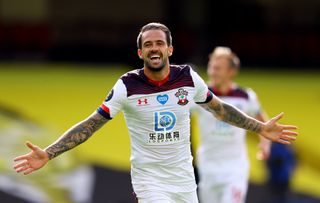 Danny Ings may have handed all of his football memorabilia onto his father – but he revealed he has kept his one and only England cap close at hand to use as a target and further his international career.

The 28-year-old Southampton striker made his Three Lions debut in a Euro 2016 qualifier away to Lithuania almost five years ago.

Having just signed for Liverpool, Ings appeared to be heading for big things before he suffered a serious knee injury just days after making his England bow.

He would go on to leave Anfield and return to Saints – his boyhood club who had released him from their youth set-up for being too small – for whom he would hit 22 Premier League goals last season.

That has seen him finally land another England call-up as he looks to add to his collection of caps in the forthcoming Nations League fixtures away to Iceland and Denmark.

“Since I was a kid and throughout my career, my dad has all the stuff – but the cap stayed with me as a reminder,” he said.

“It was something for me to work towards. I just kept it in the house with me because I did not want to have just one cap.

“I want to represent my country more and more and to be in the squads. I am extremely excited.

“It is not on display but it is just in the house… there. When I got the call, it was good to get it out and hopefully I can add more to it in the future.”

Asked whether his recent setbacks have made this call-up something he can appreciate more than he did the first time around, Ings added: “Yes, I think so.

“It has been a long time since that brief spell in the national team so to be back in this environment it gives me great confidence that over the years I have been doing something right and improving and trying to get back to the levels I wanted to be at.

“As I have said before I want to get even better now and keep improving and try to make as many squads as I can because it will be a great feeling to do so.”

Ings also pointed to the example of Jamie Vardy – with the pair having followed similar career paths.

Vardy, 33, has retired from international football but ended the 2019-20 season with Leicester as the Premier League Golden Boot winner.

“What Jamie has done for years for Leicester has been phenomenal,” added Ings.

“He has a similar background to me in non-league football. So it is great.

“I just want to be as consistent as I can be in training and in games and if it means I am scoring goals every season from now on, then fantastic.

“But as long as the team is winning and we keep improving as a club, that’s very important.”