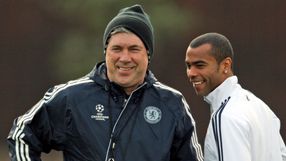 The Chelsea star’s contract is set to expire next summer and early reports suggest club and player may be some way apart when it comes to agreeing an extension.

Ancelotti is fully aware of the 31-year-old’s capabilities, having managed the former Arsenal man during his two-year spell in the Stamford Bridge hotseat, and could be prepared to move for Cole in January.

"For this season, we have a very good squad but next year, I don't know what is going on. Ashley Cole is the best left-back in the world at the moment," he told reporters

Ancelotti insists it is natural for big name players to be linked with PSG due to their spending power, although he added that not every rumour comes to fruition.

"This is normal because a lot of players are linked with PSG in the market," he added.

"The newspapers said that 100 players could come here."