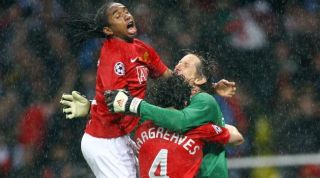 Former Manchester United midfielder Anderson has described the terror he felt at being brought off the bench to take a penalty in the 2008 Champions League Final shootout.

The Brazilian’s interview features in the July 2020 issue of FFT – a Brazil special out in shops now and available to order online with free delivery.

During his chat with FFT, Anderson remembered the intimidating experience of taking part in the shootout victory over Chelsea – and the part that Ryan Giggs played in making sure he was involved.

“I was only 20 and thought, ‘Oh f**k!’ That was huge pressure. Imagine being remembered as the guy who missed a penalty in the Champions League final for the biggest club in the world?

“I warmed up, came on and the referee blew his whistle. I didn’t touch the ball once. The walk to take my penalty was the longest of my life. A lot of things came into my mind – all the struggles I’d had, and I thought about my family and friends.

“Then I got to the penalty spot and, f**k, Petr Cech was massive. I closed my eyes and hit the ball as powerfully as I could. It just went past Cech’s right hand.”

A year later, Anderson was in United’s starting line-up as they tried to win a second consecutive Champions League title in the final against Barcelona.

At half-time, with the Red Devils trailing 1-0, the midfielder was replaced by striker Carlos Tevez, but he insists he has no hard feelings about Fergie’s decision to substitute him.

“It was the best decision Ferguson could have made, as we were 1-0 down to Barcelona and had to attack,” he said.

“The best way to do that was to replace a defensive midfielder with a forward, Carlos Tevez. The main objective was to win as a group, so I had no problem accepting that.”