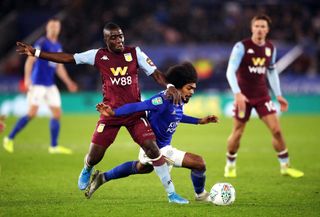 Aston Villa boss Dean Smith believes his side showed they have learned lessons from last month’s heavy loss to Leicester.

Smith’s team were thrashed 4-1 by the Foxes at Villa Park in the Premier League on December 8 but a month on earned a 1-1 away draw in the the first leg of their Carabao Cup semi final.

Frederic Guilbert put Villa ahead at the King Power Stadium on Wednesday night and the visitors defended stoically in the second half to maintain that advantage.

However, their resistance was broken after 74 minutes by Kelechi Iheanacho to leave the second leg at Villa Park on Janaury 28 delicately poised.

“We can take a lot of confidence and belief from the performance and to leave here unbeaten,” said Smith. “I think everyone knows how well Leicester have been playing and the quality they have got and they put us under a lot of pressure.

“We had to learn lessons after the goals we gave away at Villa Park, where we were poor. They counter-attacked us very easily and we never got to grips with that and we learned the lessons very well because I thought it was a real solid defensive performance.

“We relied on some blocks and some good saves from Orjan (Nyland) and all in all it was a really good defensive performance and that is testament to the players.”

We put in a BIG shift and it ends all square in Leicester.— Aston Villa (@AVFCOfficial) January 8, 2020

Nyland made two solid saves to deny Jamie Vardy in the first half before thwarting James Maddison late on as Leicester pushed for a winning goal.

Smith said: “He is a good goalkeeper. He snapped his Achilles when he was playing really well in the Championship and he has had to be patient and work his way back.

“He made some really good saves when he was called up on. It was a really mature performance, but let’s not forget that he is an international goalkeeper.”

Great come back foxes 🦊 never quit. Happy to get another goal all glory to God pic.twitter.com/AHjv6pyLfY— Kelechi Iheanacho (@67Kelechi) January 8, 2020

Since arriving from Manchester City in the summer of 2017 in a £25million deal, the striker has failed to justify his price tag and has been the subject of criticism from some quarters.

However, this season he has six goals in eight appearances, including the latest against Villa after coming off the bench.

It was the 23-year-old’s third goal in the Carabao Cup this season and Rodgers is pleased to see Iheanacho reaping the reward for his hard work.

“He’s a big talent,” said the Leicester boss. “He didn’t play a lot of football at Manchester City and it takes a bit of time to adapt.

“But since I’ve come in his confidence has grown an grown and we believe in him and believe in his talent and this season he has really come to the fore.

“It was a great finish. He’s been so important for us. You see his confidence all the time whether he starts or comes into the game, and that’s the beauty of him now – he is making an impact in games.”