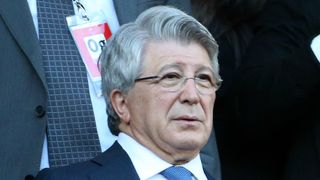 With speculation rife about a potential transfer to Barcelona for Atleti forward Antoine Griezmann, Cerezo indicated there would be departures following the end of the season.

Diego Simeone's men were unable to mount a serious challenge to LaLiga champions Barca this season and the club president acknowledged the outlook is not entirely positive, despite being pleased with their growth.

"We are fighting and trying to have more income to reduce the debt we have," Cerezo told Marca.

"We have great people in our club who handle the economic section that they are doing magnificently. [Atletico chief executive] Miguel Angel Gil and his team - I want to congratulate them. Atletico is getting bigger every day.

"There are thousands of footballers who want to play at Atletico Madrid. The exits will be the ones that have to be. Now we do not think about that, we think about being able to be European champions, in which we have a great, ideal coach, and who will be with us many more years."

Atleti will battle it out with Real Madrid for second position in LaLiga, but Cerezo anticipates a serious title tilt next term.

"We were ready to this year, but Barcelona surpassed us," he said. "They are champions and we have to congratulate them.

"We are second, which is extraordinary, but we won't settle for that and we will continue to aspire to win the league again."