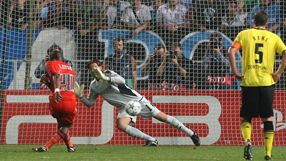 Ghana forward Ayew struck in each half and France striker Loic Remy was also on target in a lively game to put Marseille firmly in command of Group F with six points from two games.

France keeper Steve Mandanda was also instrumental in the former champions' win, making a series of superb saves throughout.

Ayew, who opened the scoring in the 20th minute, put the result beyond doubt in the 69th from the penalty spot after Remy had doubled the tally, leaving Dortmund third in the Group with one point.

Marseille's night finished on a sour note when substitute Jordan Ayew was sent off in stoppage-time, picking up a second yellow card for diving.

"Winning a Champions League game does not happen that often," coach Didier Deschamps, who was in the Juventus team that lost 3-1 in the Champions League final against Dortmund in 1997, told a news conference.

"But we were not unlucky tonight, they did not deserve to lose with such a big margin. It was not perfect but we've got six points."

Marseille will next face Arsenal, who are second in the Group with four points after beating Olympiakos 2-1 on Wednesday.

"We now have two games to play against Arsenal, who are the best team in the Group, and we need to take points against them," said Deschamps.

Marseille will entertain the Londoners, who have also been struggling in their domestic league, in three weeks time.

Dortmund coach Jurgen Klopp said his side had paid dearly for their mistakes.

"We could have equalised on several occasions. In the first half, but also in the beginning of the second half," Klopp told a news conference.

"We made several mistakes and we paid for them. Sometimes you just have to kick the ball away.

"Even when we enjoy possession, we're not patient enough. We played well but we still lost 3-0."

The German champions got off to a solid start but Marseille looked dangerous on the break, and the hosts went ahead when Andre Ayew, a constant threat on the left flank, was set up by Remy to unleash a low shot past Roman Weidenfeller.

Marseille, who have won only one from eight league games this season, stayed in front thanks to the in-form Mandanda as the France keeper denied Mario Goetze several times with lightning quick saves.

Deschamps's side doubled the lead in the 62nd minute against the run of play when a Mats Hummels header landed into the path of Remy, who volleyed home from inside the box.

Remy was brought down in the box seven minutes later and Ayew got his second by cooly slotting past Weidenfeller, giving Marseille a much needed confidence-boost that the Marseille players believe will help them bounce back from a mediocre start in Ligue 1.

"It was another competition, but it's a morale-boosting performance," midfielder Mathieu Valbuena told reporters.

"We now have to do the same in Ligue 1 and it starts against Brest on Sunday," added holding midfielder Alou Diarra.