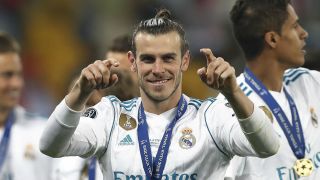 Gareth Bale has revealed how he shelved "frustration" over not starting the Champions League final to score the bicycle kick that made global headlines.

The Wales winger starred in European football's showpiece clash in May as his decisive brace gave Real Madrid a 3-1 victory over Liverpool in Kiev.

His first came in staggering style, lashing home an athletic overhead kick from Marcelo's left-sided cross in a match-turning moment of brilliance.

Bale, who after the game confirmed he would weigh up his club future, spoke of being annoyed by his omission from Zinedine Zidane's starting XI, having netted four goals in his previous three appearances.

"I was frustrated, I've said before, not to start the game. But I knew I was capable of being involved in the game and I was," the 28-year-old said during a Q&A in Cardiff.

"It was great to get the goal, pure emotion. It's just kind of one of those things that you don't think about, you just react to it.

"I've always wanted to score a bicycle kick. To do it on such an occasion was the place to do it.

"I kind of just went on holiday afterwards and tried to disconnect, so I haven't watched it too many times. If you don't try these things, they never come off."

Bale's chances of increasing his playing time with the European champions remain uncertain despite the surprise departure of Cristiano Ronaldo to Juventus.

His future is expected to become clearer when new boss Julen Lopetegui starts work at the Santiago Bernabeu next week.