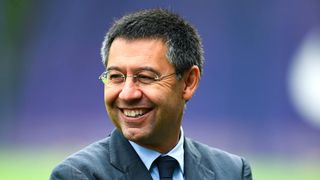 Josep Maria Bartomeu should remain in his post as Barcelona's president as it is not the right time to make a change of leadership, according to the club's vice-president Jordi Cardoner.

Criticism of Bartomeu has been growing following Paris Saint-Germain's triggering of Neymar's €222million release clause and the underwhelming signing of Paulinho, while Lionel Messi is yet to sign a new contract that has long since been agreed in principle.

Former Barcelona presidential candidate Agusti Benedito has claimed Bartomeu is "out of control" and he plans to launch a vote of no confidence against the Barca board.

However, Barcelona said in a statement released on Friday that the support of 16,570 members would be needed for the proposed vote of no confidence to go ahead.

Barca have made 33,140 forms available and Benedito now has two weeks to gather the required support in his attempt to unseat Bartomeu, whose term is due to last until 2021.

But Cardoner urged Barcelona's members to remain behind Bartomeu, who landed Ousmane Dembele from Borussia Dortmund for a club-record €105m initial fee as Neymar's replacement.

"Now is not the right time to do it and for our part we believe that these type of events are more suited to the end of season, when an evaluation, both sporting and of the board, can be made and not when the season has just begun," said Cardoner.

"I am pleased to say that members, who are the owners of this organisation, can bring about actions such as the one that began today [Friday]."

Benedito stood for the presidency at Camp Nou in both 2010 and 2015, receiving just 3,386 member votes on the latter attempt as Bartomeu was re-elected by a landslide 25,823 votes after Luis Enrique had led the club to the treble.

"I've observed the board and I can see that they're nervous and I think that they know that the no confidence vote will be passed," Benedito told Efe this week.

"It will be voted for. I don't rule out that a resignation comes before the vote of no confidence even begins."