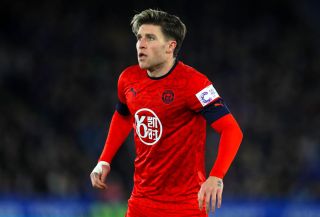 Barnsley and Sheffield Wednesday shared the points at Oakwell with a 1-1 draw in a gripping South Yorkshire derby.

Wednesday new-boy Josh Windass had put the Owls in front on his debut before a calamitous Cameron Dawson mistake gifted Cauley Woodrow the equaliser.

Both sides came into the game on poor form and Wednesday boss Garry Monk looked to change that with five positive changes to his starting XI,  including full debuts for Connor Wickham and Windass.

The opening stages lacked quality with neither side managing to take control, until Wednesday grabbed the opener in the 16th minute.

A fortunate bounce fell to Windass who, inside the box, despatched his shot past Collins for his debut goal.

However, Barnsley were gifted an equaliser just eight minutes later. A mix-up in the Wednesday backline led to a woeful clearance from Dawson straight to Woodrow, who spotted the goalkeeper out of position and guided his effort into an empty net from 25 yards.

Conor Chaplin nearly edged the home side in front after a free-kick ricocheted to him inside the box, but his shot was straight at Dawson.

The Tykes were looking the better side and nearly took the lead through Jacob Brown, who charged into the penalty area before his low effort was stopped by Dawson.

Moments later, Wickham produced a brilliant forward run of his own, the on-loan striker carrying the ball past the halfway line and into the box – but he was unable to find anyone with his cross.

Chaplin nearly provided an early goal in the second half after some good work down the left allowed him to deliver an inviting cross which Brown was unable to reach.

Fernando Forestieri clipped a diagonal ball to Alessio Da Cruz, whose volleyed effort went just wide – but neither side were dominating the game.

Barnsley were looking positive on the attack however and nearly created a goal after some good interplay between substitute Callum Styles and Jordan Williams led to a low cross which flashed across the face of goal.

Styles, who had impressed after coming on, went close with a left-footed strike from outside the box which Dawson got down well to save.

Barnsley were pressing for a late winner and nearly found it with Williams, who raced once again from full-back but saw his strike superbly blocked by Liam Palmer.

The hosts were looking the most likely to grab a winning goal but the two sides had to settle for a point.