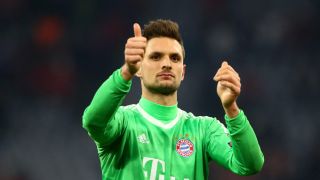 Bayern Munich have played down an injury scare for goalkeeper Sven Ulreich, with tests indicating the goalkeeper has sprained the middle finger on his right hand.

Ulreich has started 12 Bundesliga games for Bayern this season, deputising for Manuel Neuer, a long-term absentee with a foot injury.

The 29-year-old could not complete Wednesday's training session, leading to suggestions academy coach Tom Starke could be called into action for Bayern's next match, a Bundesliga meeting with Bayer Leverkusen on January 12.

But the Bavarian giants quickly assured supporters that Ulreich's injury is not as severe as initially anticipated.

Update on Sven : The goalkeeper has sprained his middle finger (right hand). His return to training will depend on how quickly the swelling goes down. No long-term absence. January 3, 2018

"The goalkeeper has just sprained his finger," Bayern said in a statement published on their website.

"His return to training is dependent on the swelling of the finger. A long-term absence is not to be feared."