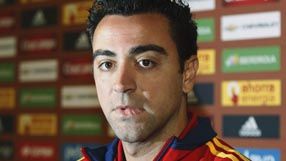 The 32-year-old playmaker is at the heart of the majority of the world and European champions' forays forward and they will need him to be on top form to see off Italy and retain their continental title.

Coach Vicente del Bosque unusually hauled Xavi off with extra time looming in the semi-final against Portugal, sacrificing him for speedy forward Pedro, but there is no question that he will start in Sunday's final in Kiev.

At a news conference previewing the game, when he will make his 115th appearance for his country, Xavi said he believed he had played a significant role in Spain's run to the final.

"I would have liked to have been more decisive in the key matches but I feel very comfortable with our way of playing, our philosophy," he added.

"I feel good and my priority is always to help the team and I will try to enjoy the game tomorrow."

Del Bosque leaped to Xavi's defence at a later news conference, leaving no doubt how important the Barcelona playmaker was in the current Spanish side.

"It is very difficult for him to play badly, he always does things well," he said.

"He has talent, quality, he works for the team and he is one of those who is most responsible for defining our style."

Italy's Andrea Pirlo, who dictates play from central midfield in much the same way, has been their standout performer and Xavi said that because football had become less physical in recent years the pair had more freedom to express themselves.

"Players with more technical ability are very lucky because the game is brighter now and more colourful, which also benefits players like Pirlo.

"I am very pleased that things have gone that way and that football has become more attacking and entertaining."

Victory on Sunday will make Spain the first nation to win back-to-back European championships with a World Cup in between.