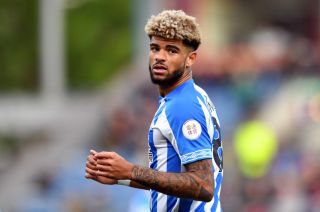 Huddersfield midfielder Philip Billing has admitted his future is uncertain as the club cling on to their Premier League status.

Billing has emerged as the Terriers’ outstanding prospect during their top-flight adventure, which appears to be drawing to a close with nine games remaining.

The 22-year-old’s contract expires at the end of next season – the club has the option of a further year – but he is expected to be a target for Premier League rivals this summer.

“Of course clubs will be interested, but I just want to think about the last nine games and make sure I perform and see what happens,” Billing said.

When asked if his future lay with Huddersfield the 6ft 6in Denmark Under-21 international added: “Yes for the last nine games, for sure it is.

“Whatever happens in the summer or next season, I don’t know. Anything can happen.

Billing, signed from Danish club Esbjerg as a 16-year-old, insisted he was fully committed to the club’s bid to fend off relegation.

The Terriers are running out of games and chase just their fourth win of the season on Saturday at home against Bournemouth after last week’s defeat at Brighton left them 13 points from safety.

“We’re working hard in training to give everything in our last nine games,” Billing said.

“Whether we’re relegated or stay up, we’re going to fight for each other and see what happens.

“But of course in football you always kind of play a bit for yourself as well to make sure in the future you have a better chance of staying in the league you want to stay in.

“But staying together as a team and focus on the nine games. That’s the main focus now.”

Town boss Jan Siewert has lost five and won one of his six games in charge since replacing David Wagner at the end of January.

The club’s second season in the Premier League has been undermined by a chronic failure in front of goal, but Billing believes the pressure has lifted now they have been written off.

“Yes I think so,” he added. “I think most people see us as down so I can’t see why we can’t go out and take it as nine games and see how it goes.

“All we can do is try and end the nine games on a positive and take it from there. Whatever happens, happens and we just have to go again.”