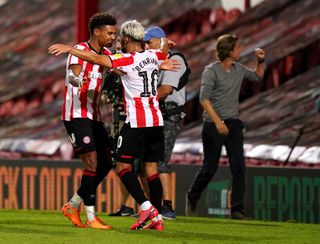 Following Brentford’s defeat by Fulham in Tuesday’s Sky Bet Championship play-off final, Bees fans may well fear that some of the club’s star names will now leave during the summer transfer window.

Here, the PA news agency looks at the players from Thomas Frank’s team around whom Premier League vultures might soon be circling.

Algeria international Benrahma’s impressive campaign has seen him score 17 times in the Championship, and Chelsea and Arsenal are among the clubs he has been linked with. The 24-year-old joined Brentford from Nice in the summer of 2018 and contributed 10 league goals in the first season that followed.

Fellow forward Watkins finished as the division’s joint top-scorer for 2019-20, alongside Fulham’s Aleksandar Mitrovic, on 26 goals, making it 46 in the league that he has registered in total since arriving from Exeter three years ago. Southampton and Crystal Palace were recently reported to have been monitoring the 24-year-old.

The other component of Brentford’s formidable first-choice front three is Frenchman Mbeumo. He has netted 15 league goals in what is his first season with the club, following a switch from Ligue 2 outfit Troyes last summer. Mbeumo is the youngest of the ‘BMW’ trio, aged 20.

Left-back Henry has played in every league match for Brentford this term, delivering eye-catching form, after being hampered by injury in each of the previous three seasons. Like Watkins, the 23-year-old former England youth international – signed from Walsall in 2016 – put pen to paper on a new contract with west Londoners last August.