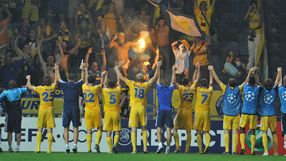 The Group H clash is one of eight matches across the continent featuring four other former Champions League winners - the pick of which features Olympique Marseille at home to Borussia Dortmund in Group F.

Holders Barcelona, having conceded a last-minute equaliser in a thrilling 2-2 draw with AC Milan in their opening group match at the Nou Camp, will be anxious to take all three points against the champions of Belarus.

BATE began their campaign with a low-key draw at Czechs Viktoria Plzen but things are about to get a little more exciting for Rudik and his team mates.

"Because I have never met creatures from outer space before," Plzen said when asked what was so special about the prospect of a close encounter with the likes of Lionel Messi, Xavi and David Villa.

"I wanted to play against Barcelona and luck was on my side in the draw," the 24-year-old added on UEFA's website.

Porto, European champions in 2004 and 1987, travel to Zenit St Petersburg in the early kick-off in Group G while seven-times champions Milan host Plzen in the other Group H game.