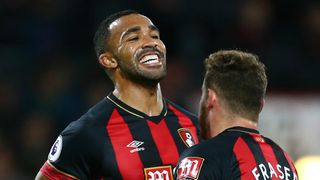 Callum Wilson scored his eighth Premier League goal of the season, as well as assisting another, as Bournemouth ended a run of four straight defeats with a 2-1 victory over Huddersfield Town.

England striker Wilson headed Bournemouth into the lead when he connected with a free-kick from Ryan Fraser, who has provided more assists than any other Premier League player this season with seven.

Wilson then returned the favour, providing a pass that allowed the Scottish midfielder to drive home Bournemouth's second of a game that they did not have all their own way.

Terence Kongolo pulled a goal back for the visitors before half-time but for all their running and hopeful balls into the penalty area, Huddersfield lacked the sort of clinical finish that Wilson has delivered so often for Bournemouth this season, helping the Cherries pick up all three points.

Huddersfield's Florent Hadergjonaj squandered an early chance from a corner and his miss was punished when the unmarked Wilson arrived in the box to powerfully head home Fraser's free-kick, the 26-year-old beating goalkeeper Jonas Lossl to his left.

Joshua King went close with two chances to score Bournemouth's second before Wilson burst into the Terriers' half with 22 minutes played and, finding himself surrounded, squared the ball to Fraser, who steered a shot through the legs of the advancing Lossl.

Asmir Begovic made a trio of saves to preserve Bournemouth's two-goal advantage, the best coming from a close-range Laurent Depoitre header.

However, the home side’s goalkeeper was beaten by a looping Kongolo header after his defenders failed to clear an Aaron Mooy cross seven minutes before half-time.

Bournemouth had Begovic to thank for coming to their rescue when Charlie Daniels' poor defensive header fell to Mooy, whose low drive was well saved by the Bosnian keeper, and that proved to be Huddersfield's best chance to equalise despite dominating after the break.

What it means: Bournemouth up to sixth

Ahead of Wednesday's Premier League fixtures, Bournemouth moved ahead of Everton, Manchester United and Leicester City in the Premier League table. They now sit just seven points outside the top four after putting an end to a worrying recent run of form.

Bournemouth would not have won this game had it not been for the sharp reactions and agility of goalkeeper Begovic, who made crucial saves either side of half-time to make sure the hosts retained their advantage.

Careless Terriers caught on the break

After Wilson's opener, Huddersfield needed to remain in the game as they continued to look threatening in attack. Instead they were caught short of numbers at the back for Fraser’s crucial goal, allowing the 24-year-old a free run through to beat Lossl.

While Huddersfield face a daunting trip to Emirates Stadium to play Arsenal on Saturday, Bournemouth entertain Liverpool on the back of a morale-boosting victory in the early kick-off on the same day.