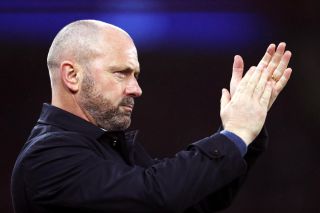 Reading manager Mark Bowen praised his side’s performance after they ended a run of seven league games without a victory by winning 3-0 at Sheffield Wednesday following goals from Yakou Meite, George Puscas and a Sam Baldock penalty.

The result means that Wednesday, who had to play for most of the second half with ten men after having Osaze Urhoghide sent off, have now won just once in their last 10 Sky Bet Championship outings.

Bowen said: “I was delighted with the performance and the result. The conditions were awful, but I asked the players to show football intelligence and I thought we did that in the first half.

“When we get things right, we are a match for any team in this league. I know that. We needed to start the game quite fast. In the first 10 minutes, I didn’t think we were as I wanted us to be, but we then took control.

“It was important that after getting our noses in front that we built on that. Yakou Meite has been telling me that he’s been wanting to play in a more central role, but he is more comfortable coming in off that right side.

“He’s into double figures on goals now but it’s not just that. His goals are fantastic but it’s the work he continually did. It was a great all-round performance from him.”

The hosts were the first to create an opening when Fernando Forestieri broke clear and found Kadeem Harris who forced a save from Rafael Cabral. Omar Richards cleared as Alessio Da Cruz looked to pounce on the rebound.

Meite gave Reading a 21st-minute lead, tapping past Cameron Dawson after getting on the end of a great through ball into the area from Ovie Ejaria.

Wednesday were reduced to 10 men in the 49th minute when Urhoghide received a second booking after bringing down Ejaria.

Ejaria had a chance when he was one-on-one with Dawson, but the keeper did well to save.

Baldock completed the scoring in stoppage time, finding the net from the penalty spot after Dominic Iorfa fouled Andy Rinomhota inside the area.

He said: “Every day is a tough day at the moment and of course it’s extremely difficult. It’s a cycle that we can’t seem to break.

“I’m trying everything I can and working as hard as I can to try and break that cycle. It’s very difficult but the key is to fight and keep fighting and stick together.

“Of course, I understand that the results aren’t good enough and the run that we’re on isn’t good enough. There’s a lack of confidence and fragility about us so something needs to change.

“I’ve said from the very start that this is a very big job and I’ve talked a lot about change. My aim is to get to that point where I can physically change that.

“To get to that point, you have to get results and I’m not getting the results and the team is not producing the performances that we need.

“I’ve never done a job where I’m worried about that side of it. Those things are out of my control, in terms of what happens with me or anything like that.”