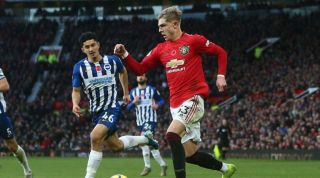 United beat Chelsea on spot-kicks to be crowned champions of Europe in Moscow 11-and-a-half years ago.

Williams, a boyhood Red Devil, was just seven years old at the time, but he succeeded in persuading his "nana" to push back his bed time.

"We got tickets for pretty much every home game. So I was watching the likes of Wayne Rooney, Carlos Tevez and Cristiano Ronaldo," he told the club's official website.

”It shows you what the top level is like and you just want to play with these types of players.

“In 2008, I remember being at home [for the final] and my nana was telling me to go to bed but I was like: ‘I need to watch the penalties’ and, obviously, we all know what happened.

”My mum and dad went out to watch the game but my nana was babysitting me. She kept telling me to go to bed but I don’t think she knew what game it was, and how big it was. I told her I needed to watch it!”

Williams made his fifth Premier League start of the season in Saturday's 4-0 thrashing of Norwich.

And the teenager says he hopes to enjoy a lengthy career at Old Trafford.

“It’s a really proud thing for me and my family," he added.

“I know what I’ve achieved but I want to keep on playing and play as many games as I can for this club.

“In the position I play in, you need that energy and to be strong on the physical side of the game to get up and down the pitch, and also to help defend and attack.

“Attacking is a big part of my game. I love driving forward and giving energy to the team and helping with our attacks.