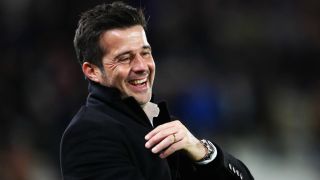 Marco Silva has been appointed as Watford head coach on a two-year deal, the Premier League club have announced.

The 39-year-old stepped down as Hull City boss following the club's relegation and has opted to stay in England.

The former Sporting CP head coach had been linked with the vacant post at Crystal Palace and with Porto back in his native Portugal.

Watford chairman and CEO Scott Duxbury told the club's official website: "Marco was one of the most sought-after head coaches in the Premier League.

OFFICIAL: is delighted to confirm the appointment of Marco Silva as Head Coach. May 27, 2017

"His pedigree and promise speaks for itself with his achievements in top divisions elsewhere across Europe, as well as his work at Hull City last season.

"We are delighted to have secured his services and to be welcoming a head coach of his profile and potential.

"It's an exciting time to be a Watford fan and I'm sure all supporters will join me in offering Marco and his family the warmest of welcomes to Vicarage Road."

Watford announced on May 17 that Walter Mazzarri's deal as head coach would be terminated despite the former Inter boss having secured their Premier League survival in his first season in charge.