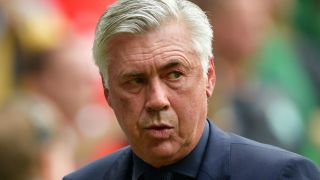 Bayern Munich head coach Carlo Ancelotti wants the Bundesliga to follow the Premier League's lead and bring the end of the transfer window forward to before the start of the season.

Clubs in England's top flight have approved proposals to finish buying players at 17:00 on the Thursday before the big kick-off in 2018-19, a move that has been widely welcomed by managers as an alternative to the end-of-August deadline that falls around three weeks into the campaign.

Only clubs in England's top flight are subject to the alteration and they will still be able to sell any players once the new deadline has passed.

Ancelotti, who led Chelsea to the Premier League title in 2009-10, feels other European countries should consider falling into line.

"I think that's a good idea. I hope this rule will be implemented in Bundesliga, too," he told a news conference ahead of Saturday's trip to Hoffenheim.

"The whole world of football is thinking about this. No one is happy to have a long transfer window.

"The Premier League will be the first but the other federations will takeover this decision quickly."

An example of high-profile business between the Bundesliga and the Premier League came on the recently passed deadline day, when Swansea City and Ancelotti's former assistant Paul Clement signed Renato Sanches on a season-long loan from Bayern.

The 20-year-old Portugal midfielder struggled for first-team opportunities at the Allianz Arena last term but Ancelotti maintains he will be watching the former Benfica man's performances with interest.

"I think it was a good choice for Renato. We suggest for him to go there because he has the possibility to play," he said.

"What was missing for him last year was the chance to play games. Now he has the possibility.

"The Premier League is a really competitive competition. The fact that Clement knows him well can help him to show his best.

"He was not able to show his best quality here, because he didn't have a lot of time to play.

"As he is still our player, and we are really interested in his season, I hope and I am sure he can show his quality."