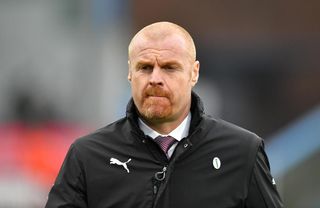 Sean Dyche has told Burnley their Premier League fate lies in their own hands as they attempt to drag themselves out of relegation trouble.

Dyche will take charge of the Clarets for the 300th time when Wolves head for Turf Moor on Saturday with the club poised precariously just two points clear of Cardiff – who have a game in hand – inside the relegation zone.

With seven matches remaining, Burnley have work to do if they are to extend their three-year stay among the big boys, the prospects for which have not been helped by a run of four-successive defeats.

Dyche told the club’s official website, www.burnleyfootballclub.com: “It gets to a point – which is now – where it’s still right in our grasp, where it wasn’t at Christmas. I think we’ve come a long way since that build-up to Christmas.

“Since Christmas, the actual form has been good. The last run has been tough, obviously. But if you mix that altogether, you’d certainly take the return in points.

“But we’ve got to get more. That’s just what it tells you on the league table.”

Burnley went eight games without defeat, collecting 18 points from a possible 24 in the process, from December 30 until they lost 2-0 at Newcastle almost two months later, and – while their remaining fixtures include tough tests against Chelsea, Manchester City and Arsenal – Dyche is confident they can add to their current points tally to ease themselves across the finishing line.

He said: “Whatever way you look at it, it still definitely revolves around us. I have made the players aware of that – not that I need to.

“They are acutely aware of that and they know the script. It’s still about us delivering performances – whoever we play.”

Midfielder Johann Berg Gudmundsson is a doubt after missing Iceland’s 4-0 Euro 2020 qualifying defeat in France on Monday evening with a minor calf problem.

Dyche said: “Obviously we have to monitor the fact he missed some training and missed the game.

“We looked at him today. He was on the grass, but we will have to make a call on that.”