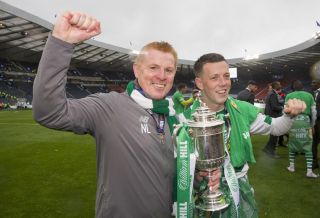 Callum McGregor has hailed the winning spirit that carried Celtic through the toughest year of their treble treble push to land yet another clean sweep.

Neil Lennon’s side had to dig deep to hold off Hearts and seal a ninth straight trophy with victory in last weekend’s William Hill Scottish Cup final.

But it was no surprise to midfielder McGregor that his team found the answers as Craig Levein’s men threatened to rip away their place in the Parkhead history books.

Ryan Edwards fired the Jambos into a surprise lead at Hampden but Odsonne Edouard came up with two vital goals to send the Celtic support into delirium.

Praising the mental strength of his Hoops colleagues, Scotland international McGregor said: “It’s so hard to put into words how it feels to have won the treble treble.

“We came together three years ago in terms of trying to win these domestic trophies, and to be standing here in 2019, with three trebles in a row is absolutely incredible.

“It’s testament to the character of the players here. It’s such a special group. Everyone keeps saying it and it’s true – the character in this dressing room is brilliant.

“The Scottish Cup final was probably typical of the season – there were so many ups and downs, and going behind in the game sparked us into life.

“Ultimately, we had enough to get us over the line and win the trophy with two great finishes from Odsonne. When we’re up against it, this group really seems to find a way and it’s amazing to be a part of it.”

McGregor and his team-mates were rocked in February when boss Brendan Rodgers announced he was quitting to join Leicester.

Lennon arrived to take over the reins but the upheaval threatened to shake the team off course.

And McGregor admits the change at the top took its toll on the players.

He said: “I think the third one probably was the hardest to achieve. We had more criticism labelled at the team and it was a wee bit of a rockier road in terms of the season.

“And even though people might criticise us, this is a special group. To win three trebles in a row and do it in such convincing fashion is incredible, and it’s hard to put into words how it feels.”