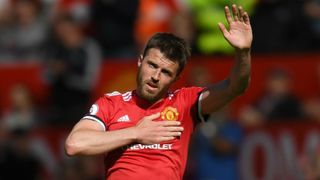 Michael Carrick believes his performance in his final game at Old Trafford served as evidence the time is right for him to retire, despite setting up the only goal of the game in a 1-0 Manchester United win over Watford.

Carrick, who will join Jose Mourinho's backroom team from next season, was named captain and given a guard of honour for Sunday's final-day clash, and marked his 464th United appearance by lofting a wonderful ball over the top of the Watford defence for Juan Mata to tee up Marcus Rashford.

That proved the decisive moment in a largely low-key affair, with Carrick withdrawn to a standing ovation from the home fans five minutes from the end.

"I want to say a massive thank you to my family and friends. I'm grateful for everything you've done for me, thank you.

"It wasn't the best [performance] from me [today] but it tells me the time is right. I want to thank the manager for the opportunity, it's unbelievable for me. I look forward to learning and working closely with him.

"I'm sure he will teach me some things and we'll have some success in the near future I'm sure."

"Lastly it's been a tough week for everyone at the club. Part of this family is Sir Alex and he's had a tough week this week, I would just like to say I'm sure he appreciates all the support you have given him.

"All our thoughts and prayers are with him and we wish him a speedy recovery.

"We want to see him sitting back up there [the directors' box] some time soon."