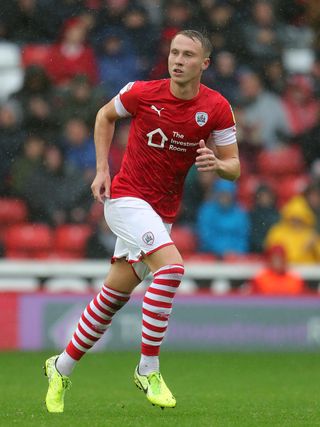 Gerhard Struber’s side remain in the drop zone, but they have now won three Sky Bet Championship matches on the bounce thanks to Cauley Woodrow’s first-half goal.

Woodrow cashed in on George Long’s dreadful mistake after 42 minutes to claim a 14th league goal of the season.

Barnsley are now just six points adrift of Hull, who have not won in the league for nine games, and were good value for this victory.

To serve notice of their newly discovered intent, the visitors started brightly at the KCOM Stadium – and could have opened the scoring after 14 minutes.

The ricochet from that chance fell kindly to Aapo Halme, whose well-directed shot was deflected over the crossbar for a corner.

Hull had their moments on the counterattack, but Barnsley were comfortably the most assured team from there on in.

Luke Thomas underscored that fact after 26 minutes when he pulled clear of two defenders, only to wildly misfire from a tight angle.

Thomas was also involved when Woodrow’s neat pass across the penalty box found the 21-year-old in lots of space on the right after 31 minutes.

The midfielder was this time on target, with Long beaten, but Matthew Pennington did well to snuff out the danger close to the goal-line.

Hull responded with a stylish attack on the break from which striker Josh Magennis ought to have scored from a central position.

Goalkeeper Bradley Collins was, however, impressively alert to the danger.

If head coach Grant McCann anticipated an upturn in fortunes following that chance, his optimism was fleeting as Barnsley deservedly opened the scoring soon afterwards.

Conor Chaplin’s low cross from the left should have been routinely stopped with two hands by Long.

But the goalkeeper allowed the ball to squirm through his fingers, with Woodrow the grateful recipient from an unmissable position.

Long at least partially made up for that error when he stayed big to stop Brown in a one-on-one position inside first-half stoppage time.

Hull improved after the restart, with substitute Martin Samuelsen not too far away with a downwards header which was pawed to safety by Collins.

Collins later tipped Jackson Irvine’s close-range header over the crossbar after a good headed cross from Pennington, who had earlier blocked Michael Sollbauer’s powerful drive off the line at the other end.

That was as good as it got for Hull, who could find no way past a resolute Barnsley, whose supporters left East Yorkshire with conviction that the once inevitable threat of relegation could yet be avoided.