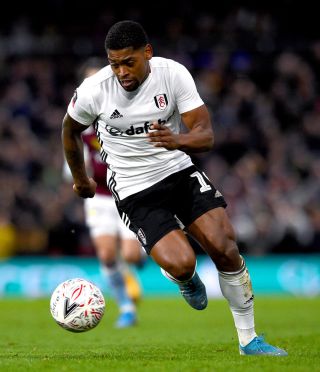 Ivan Cavaleiro’s first-half goal gave Fulham a 1-0 victory at Hull and a first ever success at the KCOM Stadium.

The home side could have been forgiven for welcoming this fixture, with the Cottagers not having tasted victory in East Yorkshire since 1996.

Yet Scott Parker’s men battled to the three points and impressively strengthened their place within the Sky Bet Championship play-offs.

Parker will, however, be indebted to Cavaleiro, whose moment of quality settled a scruffy game that was blighted by stiff gales.

The Portuguese, who this week signed a permanent four-and-a-half-year contract from Wolves, showed his class with a controlled strike from just outside the penalty area.

Hull had their moments in the second half, but they rarely looked close to claiming a victory which could have taken them above Fulham in the Championship.

Parker’s satisfaction at the performance will, though, be tempered by the loss to injury of talisman Aleksandar Mitrovic, who was stretchered off the pitch after 80 minutes.

With Mitrovic and Hull winger Jarrod Bowen in opposition, two of the most expansive teams in the league might have been expected to have served up an attacking game of football from the outset.

Yet it was not until the 22nd minute that the first meaningful chance of the game was created.

Hull winger Kamil Grosicki at first did well to create a pocket of space towards the left of Fulham’s penalty box.

But he dragged his shot wide of Marek Rodak’s right-hand post, when it perhaps looked easier to have at least hit the target.

Grosicki’s half-chance seemed to have a galvanising effect upon the visitors.

Fulham had hitherto been efficient and swift in possession – without being especially potent up front.

That was until the 29th minute when Cavaleiro scored a beauty with his right boot.

Head coach Grant McCann will have been unhappy with Hull’s weak attempts to clear the football to safety from a fairly innocuous position.

That said, neither goalkeeper George Long nor City’s back-four could do a thing about the goal as Cavaleiro delivered a magnificent, curling strike from the left of Hull’s penalty box.

Long could only watch on as the ball was flighted into the top-right corner of the net with surgical precision.

Hull improved after the restart with Grosicki, who had a clear sight of goal, guilty of complicating matters by electing to pass to a non-existent team-mate inside the box.

Jackson Irvine’s skilful cross from the left flank later went within inches of finding the outreached right boot of Tom Eaves, while Hull also had a goal disallowed at the death for offside.

But that was as good it got for the hosts who were, for the most part, kept at arm’s length by a well-disciplined Fulham back four.

And even in spite of Mitrovic’s enforced departure – he twice went down injured before being replaced by Joe Bryan – Fulham still won at a relative canter.