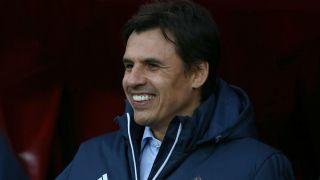 Sunderland showed they will not go down without a fight after launching a sensational comeback in the final 20 minutes of their Championship clash with Bristol City on Saturday.

Things had looked bleak for the Black Cats after one win in five matches and another defeat looked forthcoming when they fell 3-0 behind at Ashton Gate.

Write them off at your peril, though, as Sunderland battled back to draw 3-3, blunting the Robins' play-off charge further.

Wolves' march towards the title continued against QPR, but Derby County were held at Pride Park by James Maddison's ninth of the season for Norwich City.

Everything is going Wolves' way in the Championship and their 2-1 victory over QPR extended their advantage to a healthy 13 points.

Derby's 1-1 draw with Norwich enabled Wolves to edge further away from the chasing pack, goals from Helder Costa and Alfred N'Diaye sealing three points at Molineux.

For the Rams, they could find themselves out of the top two should Aston Villa beat Birmingham City on Sunday, Gary Rowett's men held as Norwich scored a late penalty – having had one saved in the first half at Pride Park.

All the key numbers behind today's draw with the Canaries... February 10, 2018

Sunderland looked dead and buried at half-time in Bristol as they trailed 3-0, but Chris Coleman's interval team talk produced a sensational recovery.

37' do find a third and have absolutely crumbled here. Diedhiou buries his second from close range and it's game over with little more than half hour played. 3-0.February 10, 2018

Aiden McGeady's strike and two own goals – the latter coming in stoppage time – rescued a point, although it does little to help their survival hopes.

While managerless Barnsley were drawing 1-1 with Sheffield Wednesday, their former boss was slipping to a first defeat in the Leeds United hot seat.

Paul Heckingbottom controversially swapped Oakwell for Elland Road this week only days after signing a new deal with the Tykes.

His first match failed to produce three points, though, as Sheffield United claimed a 2-1 win at Bramall Lane – Billy Sharp with both goals against his former club.

Brentford moved level with Leeds on 44 points after a 1-1 draw with Preston North End, while Adama Traore struck twice as Reading's miserable run continued against Middlesbrough.