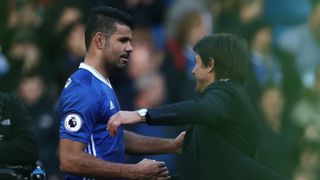 Costa and Conte had a tempestuous relationship at Stamford Bridge despite the striker's goals firing the Blues to the Premier League title last season.

The Brazil-born Spain international was subsequently frozen out by Conte, claiming the Italian informed him he was no longer needed at the club via text message.

Costa returned to former club Atletico Madrid when their transfer ban was lifted in January, but he was a keen observer of Chelsea's trip to Camp Nou on Wednesday.

Watching versus at home, former Chelsea star Diego Costa has been having a bit of fun.Which name is missing from this graphic? March 14, 2018

Watching on at home, Costa posted a shot of a team news graphic to his Instagram Stories.

But there was one omission from the Chelsea squad list, with Costa scribbling out Conte's name.

Costa, 29, has thrived on his return to Atletico despite a string of niggling injuries, scoring six goals for the LaLiga side.