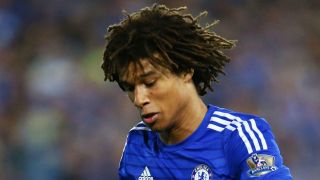 Antonio Conte has no doubt Nathan Ake can fill the void in Chelsea's defence if David Luiz has to spend time on the sidelines due to injury.

David Luiz has been a mainstay of the Blues' line-up since re-joining the club from Paris Saint-Germain in the close-season and his impressive performance for the Premier League leaders saw him named in the PFA Team of the Year.

However, the Brazil defender was substituted in the closing stages of Chelsea's superb 3-0 victory at Everton on Sunday due to a groin injury with Ake, recalled from a loan spell at Bournemouth in January, taking his place in the centre of a three-man defence.

It remains to be seen if David Luiz will be fit for Monday's contest against Middlesbrough, but Chelsea boss Conte is impressed by what he has seen from Ake and would have no qualms selecting him if needed.

"I didn't speak with the doctor about his (Luiz's) injury but I don't think it is a serious injury for him," Conte said.

"I hope in the next game that David Luiz is available to play. Also now in this part of the season it is important sometimes to try to play if you are not 100 per cent with your condition.

"He is showing us great commitment in this season. Don't forget his injury in the knee after the game against Manchester City - but I am very pleased for the impact of Ake.

"He came on and I think he looks a veteran and it is great.

"He is only a young player that started to play for two years, Watford and Bournemouth, and now is showing great commitment, work-rate and concentration when I ask him to play. It is great for him.

"It is not easy to be used to play every game for Bournemouth and to arrive for Chelsea and stay on the bench and sometimes understand.

"But I think he understood I trust him because I put him in the [FA Cup] semi-final against Tottenham. I put him now in a very important moment for us."