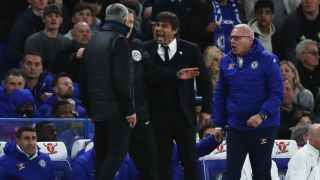 The former Juventus boss this week instructed Mourinho to "think about his own team" after he referred to managers who "cry" about injury problems.

However, when pressed about the idea of a simmering feud, Conte insisted it is "stupid" to focus on the matter.

"Every manager has to talk about his job, himself, his team, his players. Not the others. Every coach must be focused on his own work. It's the best way," he told a news conference on Friday.

"I think these are stupid things, a stupid issue. It's fun to see your interest in this! I'm surprised."

Chelsea head into Saturday's meeting with Watford on the back of two Premier League defeats in a row and a 3-3 Champions League draw with Roma on Wednesday.

The Blues have lost three times in their opening eight league games, having been beaten just five times en route to winning the title in Conte's first term in charge.

There have also been reports of unrest in the dressing room during their difficult run, with some senior players said to be unhappy with the head coach's arduous training programme.

Although Conte says he is happy with his players' commitment, he suggested the return of European football this season has forced Chelsea to work "70 per cent less" in training than they would like.

An autumnal feel at Cobham today as the team head out for training!  October 20, 2017

"My method is the same, like last season. Honestly, I think we are maybe working 70 per cent less this season, on the tactical aspect and the physical aspect, because we are playing every three days," he said.

"When you play every three days, it's impossible to work above all on the physical aspects. On the tactical aspects you have to work less and pay less attention on every detail. We are doing this.

Conte added his determination to give everything to turn results around at the club despite suggestions his job is coming under increasing pressure.

"I think every manager has to feel pressure," he said. "But I repeat: I try to put all myself in the job. For this reason, I'm happy, I'm happy when I go to my house because I know I put in all of myself for this club, these fans, these players.