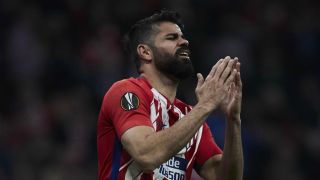 Diego Costa and Lucas Hernandez were injured as Atletico Madrid booked a place in the semi-finals of the Europa League.

Lucas was replaced at half-time after suffering what Atletico described as a "strong facial trauma" in a 1-0 defeat away to Sporting CP, Diego Simeone's men heading through 2-1 on aggregate.

Costa followed shortly after the restart after the striker appeared to sustain an injury to his left leg, but 2010 and 2012 winners Atletico were able to cling on.

Injuries to Costa and Lucas come as a blow to Simeone, who saw his squad options reduced by the sales of Nicolas Gaitan, Augusto Fernandez and Yannick Carrasco - who all moved to the Chinese Super League - during the January transfer window.