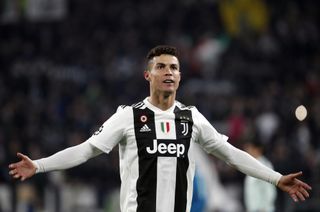 Cristiano Ronaldo took centre stage in the Champions League again on Tuesday night as his hat-trick helped Juventus defeat Atletico Madrid and secure a place in the quarter-finals.

Juve had trailed Atletico by two goals heading into the round-of-16 second leg in Turin – but Ronaldo overturned the deficit with another stand-out individual display.

Here, Press Association Sport takes a look back at the forward’s eight Champions League trebles, which is a joint record for the elite European competition alongside Lionel Messi.

Ronaldo secured a first Champions League hat-trick as Real Madrid beat Dutch side Ajax in the group stages. The Portugal international had opened the scoring just before half-time, and completed his treble with a late double.

Los Blancos ran out comfortable winners in Istanbul. Ronaldo scored twice just after the hour and then completed his hat-trick in stoppage time with a fine individual effort.

Ronaldo scored twice from the penalty spot to help see off the Ukranians on matchday one – and headed in a late third after Marcelo’s drive had been saved.

He grabbed another treble just three months later, scoring four times in the space of 20 minutes either side of half-time as Swedish side Malmo were swept aside. France striker Karim Benzema also found the net three times at the Bernabeu. It took Ronaldo’s season tally to 11, and so becoming the first player to reach double figures in the Champions League group stage.

Another three goals from Real Madrid’s talisman helped them see off German outfit Wolfsburg to overturn a 2-0 first-leg deficit and reach the semi-finals. Ronaldo opened the scoring in the 15th minute – and swiftly added another just 90 seconds later with a bullet header from a corner before wrapping up a brilliant individual display when clipping in a 25-yard free-kick with 13 minutes left.

The holders progressed to the semi-finals after seeing off German giants Bayern Munich 4-2 after extra-time in a controversial second leg at the Bernabeu. Bayern had Arturo Vidal sent off late on and Ronaldo scored twice during extra-time to complete another hat-trick, which brought up what was his 100th Champions League goal. There was, though, no Video Assistant Referee available to check over what looked like strong claims for offside in the build-up to his second effort.

Together💪💪💪 pic.twitter.com/BulXteEOyu— Cristiano Ronaldo (@Cristiano) May 2, 2017

Ronaldo was on target again to give Real a 3-0 advantage in the first leg of their semi-final against city rivals Atletico Madrid. The Portuguese opened the scoring after 10 minutes with a header, before adding a late double, his second fired into the top corner, to help take control of the tie.

After swapping Madrid for Turin, Ronaldo continued his remarkable Champions League record with another hat-trick as Juventus bounced back from a 2-0 first-leg defeat to reach the last eight. Two headers, the second given by goal-line technology, levelled the tie before Ronaldo slammed home a late penalty to become the oldest scorer of a Champions League hat-trick.