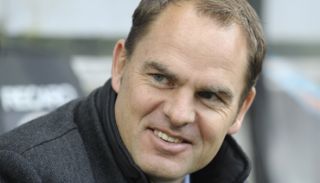 Ajax, who beat Willem II Tilburg 5-0 to start the celebrations, have twice before won three straight championships, once in the late 60s under the guidance of Michels and from 1994-96 with current national team coach Van Gaal at the helm.

"It is fantastic to be named with such legendary coaches at my age," the 42-year-old De Boer said in weekly magazine Voetbal International.

"Especially because I consider Ajax as my club and it gives me pride to have my contribution to these new successes."

De Boer, who took over from Martin Jol in December 2010, still has some way to go to match the achievements of Michels and Van Gaal.

Michels' title hat-trick was a stepping stone for a team that went on to dominate Europe in the early 1970s, with three straight European Cups from 1971.

De Boer's achievements are likely to have caught the attention of some of Europe's biggest clubs, but he sees his near future in Amsterdam.

"I heard about it but the only one who directly approached me was Liverpool," said De Boer, who won five Dutch and one La Liga title as player.

"When they called I requested a day to think about it but I knew already that I did not want leave Ajax at this moment.

"Liverpool is a great club where I could work well with my vision but I am not ready to take that step."

Ajax have struggled to hang on to some of their best players in recent seasons, a situation that makes it difficult for the club to compete for European honours.

Where other clubs might use the money to reinforce their squad, Ajax prefer to support a philosophy that focuses on youth development.

For De Boer, who came through the club's youth academy together with his twin brother Ronald, it is a logical decision.

"I never worried about that. I knew which talents were coming from the youth department and where we needed to sign the right replacements," added De Boer.

"You know when you are head coach of Ajax you have to start all over again every season and that makes this job a big challenge."

After his third straight title, his target is now to do better in the Champions League, where they have failed to get past the last 16 since 2003.

Despite healthy financial results the club is not planning to spend a fortune in the transfer market in the close season.

"There is a possibility that we will make an exception, but it has to be an exceptionally good player," added De Boer.

"But we will maintain our policy that the departure of key players has no consequences for us."