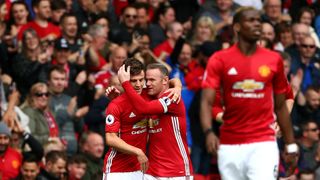 Josh Harrop said scoring on his Manchester United debut was a "dream come true" after he hit the opening goal against Crystal Palace on Sunday.

Harrop was teed up by Paul Pogba but had lots of work to do after 15 minutes at Old Trafford, cutting inside Palace defender Martin Kelly to create an opening for himself.

The 21-year-old - who became the 100th player to score a Premier League goal for Manchester United - bent a terrific finish into the corner to make the perfect start to his United first-team career.

"I've dreamed about it so many times so, for it to come true, I'm delighted," Harrop told MUTV. "[I'm] over the moon!

"All my family were here, my friends - I'm delighted they could share the moment with me. I've trained since I was eight for this moment so, for it to come true in front of everyone, I'm over the moon, speechless."

A dream debut for - he's today's Man of the Match after an impressive goal and a solid performance! May 21, 2017

Harrop had scored a hat-trick for United's reserve team at Old Trafford in front of the watching Jose Mourinho on Monday, but the boyhood United supporter said early touches of the ball were crucial to settling his nerves.

"I walked down the tunnel and was getting goosebumps, thinking 'I'm actually doing this'," he said.

"I said to myself, 'I want to get on the ball early and get as many touches as I can'. That's what I did and it helped me progress in the game.

Today's debut goal from was special for another reason - he became our th different scorer in the ! May 21, 2017

"I've been played through, cut inside, opened it up and put it in. I took the confidence from my last game with the reserves, when I scored a hat-trick here in front of the manager. That helped me coming into the game as I felt in good form, so it was good for me.

"I can only leave it in the manager's hands. That's what I want to do week in, week out - play at Old Trafford. I've supported United since I was born and it's my dream to be out there playing and scoring."