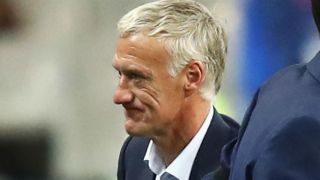 France coach Didier Deschamps lamented his side's wastefulness in front of goal after they squandered numerous chances in a 0-0 draw against Luxembourg.

The shock result put a dent in France's hopes of reaching the 2018 World Cup in Russia and left Les Bleus just one point clear of Sweden at the top of Group A with two games to play.

Deschamps' men dominated possession throughout the game and hit the crossbar twice as they had 34 shots, but they found Luxembourg goalkeeper Jonathan Joubert in fine form as Luc Holtz's side held out for a remarkable point.

When asked about the result, Deschamps told RTL France: "It is football. It makes sense.

"To have so many chances and not to score one, it's infuriating. We lacked a bit of accuracy. A number of little things were not sharp."

"Luxembourg were heroic but we lacked realism and lucidity," he added.

The final whistle in Toulouse sent Deschamps' opposite number Holtz into ecstatic celebrations, and he explained the significance of the result to reporters.

"This was a historic game for Luxembourg," he said. "For us, it is a day of glory.

"At half-time I told my players to drink a lot of water. I asked them to be more aggressive in the tackle. We also adjusted some tactical details.

"I have no criticisms to make of the French team. There was rhythm and speed in what their players did. The only criticism is that they did not score."