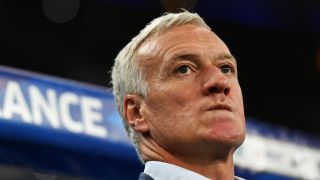 Didier Deschamps admits his side lacked aggression as they laboured to an uninspired 1-0 win over Bulgaria in Sofia.

The three points propels them back to the summit of Group A and they go into Tuesday's game against Belarus knowing a win will guarantee automatic qualification for the World Cup in Russia next year.

Les Bleus started brightly and were ahead inside just three minutes through Blaise Matuidi's sweetly struck shot, but they offered nothing in the way of attacking threat in an insipid second-half performance.

Deschamps, who now has more wins as France coach than anyone else with 42, acknowledges it was a poor display but is confident of an improved performance in Paris.

"It was a complicated match, with many faults," he told TF1.

"We did not have a great second period, and they were more aggressive. There is only one game left, and that depends only on us. We'll have to win on Tuesday. I'm confident, as I was with this game."

Goalkeeper Hugo Lloris made a stunning reaction save in the first half to preserve France's slender lead and he urged his team-mates to quickly turn their attention to the visit of Belarus.

"There is a lot of satisfaction, but it is only one step," he said.

"There is a second match on Tuesday in front of our supporters. It will be important to recover well and concentrate on our next game."